The Bookworm: Shah of Shahs 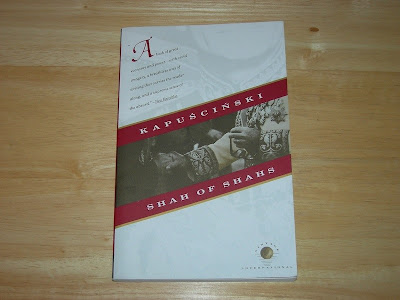 The Shah had created a system capable only of defending itself, but incapable of satisfying the people. This was its greatest weakness and the true cause of its ultimate defeat. The psychological foundation of such a system is the ruler’s scorn for his people and his conviction that the ignorant nation can always be deceived by continual promises. But there is an Iranian proverb that says: Promises have value only for those who believe in them. (Shah of Shahs, 137.)

After watching Argo last month, I returned home, cracked open a beer, and started rereading Shah of Shahs by Ryszard Kapuściński. Though Argo offered a basic depiction of life in revolutionary Iran, the movie lacked the vivid street-level detail I remembered from Kapuściński.

A sucker for all things written by Kapuściński, I first read SoS while working at UCI. As a staff member, I was able to loan books from the main library for an insanely long period — something like a whole year. (I was also able to request books already checked out, and whoever had them needed to return them within a certain time period. I never did that, though.) Having read the UCI copy, I wanted to have my own and special ordered it at Prairie Lights earlier this year. I let Bobblehead borrow it before adding it to my queue; he wrote his own review here.

SoS begins with a short, but powerful, fifteen page personal account of Kapuściński’s stay in Tehran. He has purposely messed up his hotel room to feel at home and is rummaging through notes and clippings that have lost their meaning to him. Tehran had once been packed with foreign investors and an open hotel room was a rare commodity. After the revolution, he, the reception staff, and a group of young men playing cards in the entrance hall are the only ones at his hotel. Everyone else has left. Everything has changed since the fall of the Shah and the television in the hall shows pictures of the missing — many taken by SAVAK, the Shah’s ruthless secret police that tortured and killed before it asked questions — and the executed collaborators. At night everyone closes their windows and locks their doors because “[t]he shooting starts regularly at nine as if custom or tradition had fixed the hour…. The underground keeps a low profile during the day, but at night it sends masked combat squads into the city.” Kapuściński describes the many armed militias stalking the city for revenge, offering much needed tension and detail to a number of scenes in Argo.

Following the introduction, Kapuściński uses a number of photographs, notes, and interviews to summarize the major events and players of the Pahlavi dynasty, including the last Shah, and the circumstances leading to the revolution. He describes the unrelenting fear imposed on Iranians (no one knew who was a SAVAK agent or where their offices were, so anyone could be an agent and a SAVAK office could be behind any unmarked door or façade). Tensions slowly mount and attitudes change. Sparks fly and ignite the revolution, which Kapuściński embellishes with personal insights gleaned from previous revolutions he witnessed, evident in the quote at the beginning of this post.

SoS is a powerful and poignant book, but at times it becomes too preachy and self-righteous. At times Kapuściński plays the familiar role of observer and unbiased journalist, but at others he willingly becomes a critical and sanctimonious westerner. His outlines deteriorate into hypothetical reenactments of major events. Though I assume (and want to hope) they were accurate, portions of SoS feel more like historical fiction than literary nonfiction or journalism. Not cool. That was a characteristic I do not recall from my first reading and only served to downgrade my initial opinion of the book.

On the other hand, though, Kapuściński’s first-person accounts were gripping. The small details of his stay in Tehran were what I found most interesting. Those telling, personal snippets were what I was yearning for in Argo and was left yearning for even more after SoS. I wanted more interviews and first-person experiences to reveal and illuminate life on the street. Nonetheless, the book was tight and well-written. After having spent a month rereading R.L. Stine, it was almost as if SoS was written in a different language; it took a few pages to readjust to the depth of substance.

Though it did not quite live up to my opinion of a first reading, I still think SoS is a good book. It is definitely a must-read for anyone who wants a better understanding of Iran.

Words I learned/am still unfamiliar with: All definitions are courtesy of my MacBook dictionary. Muezzin: “a man who calls Muslims to prayer from the minaret of a mosque.” Schweik: this is a reference to The Good Soldier Švejk. Mien: “a person's look or manner, esp. one of a particular kind indicating their character or mood.” Peremptory: “(esp. of a person's manner or actions) insisting on immediate attention or obedience, esp. in a brusquely imperious way.” Timorous: “showing or suffering from nervousness, fear, or a lack of confidence.” Praetorian: “of or having the powers of a praetor.” (What the hell is a “praetor”? It is defined as “each of two ancient Roman magistrates ranking below consul.”) Peripatetic: “traveling from place to place, esp. working or based in various places for relatively short periods.” Calumny: “the making of false and defamatory statements in order to damage someone's reputation; slander.” Panegyrize: “speak or write in praise of; eulogize.” Moloch: I believe it is used to mean “a Canaanite idol to whom children were sacrificed.” Dolce vita: “a life of heedless pleasure and luxury.” Abjure: “solemnly renounce (a belief, cause, or claim).” Gehenna: “(in Judaism and the New Testament) hell.” Extirpate: “root out and destroy completely.” Petard: “a small bomb made of a metal or wooden box filled with powder, used to blast down a door or to make a hole in a wall.” Lustrate: “purify by expiatory sacrifice, ceremonial washing, or some other ritual action.” Bier: “a movable frame on which a coffin or a corpse is placed before burial or cremation or on which it is carried to the grave.” Hawser: “a thick rope or cable for mooring or towing a ship.”