As mentioned in my “live” blog yesterday, I opened my magnum bottle of Christmas Ale 2011 at Bobblehead’s while we enjoyed the Alamo Bowl. So without further ado, here are my notes for the second edition of my Beer Revisited series, this time for Beer of the Weekend #310. 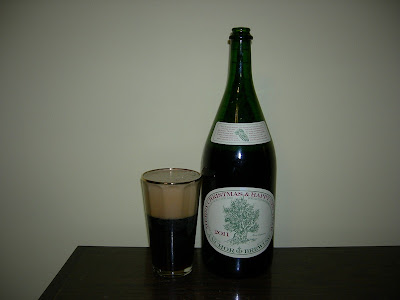 Appearance
2011: Straight pour into a pint glass. The color is dark mahogany with ruddy tones. Three fingers of thick, slightly tanned head dissipated to leave a billowy cap and later a thin lacing with a ring around the edge.

Smell
2011: The cinnamon, nutmeg, and other spices are immediately noticeable, and underneath are aromas of caramel, chocolate, cherry, and plum. There is a touch of pine and spruce, or maybe that is my imagination.

Yesterday: Nice spice right away. Cinnamon and ginger. Smells very nutty and Bobblehead thinks it is nutmeg. There are notes of festive spices but they are really not as prominent as I would want. It has a malty base with caramel and cocoa. There are also some roasted notes as well. Based on the smell, it has aged very well. It is much better than I remember. Dark fruit emerges as the beer warms. Plums, black cherry, black raspberry.

Taste
2011: Surprisingly tame for an Anchor Christmas Ale, but it does have a nice smoothness and is very mellow. Toasted malts dominate with flavors of caramel, chocolate, and toffee, and the spices are subdued compared to the smell. The cinnamon and nutmeg are prominent, however, as well as a good dose of earthy hops, pine, and spruce.

Yesterday: Much maltier than the aroma; it offers more roasted characters. Cinnamon and ginger spice up front with a little pine as well, but then the malts take over. Roasted malts reminiscent of coffee and chocolate round each sip. Each sip leave a roasted aftertaste. Very smooth. Also, the dark fruit comes in at the end.

Drinkability
2011: This year’s edition lacks the spice intensity from previous versions, which is a little saddening (I really want to point the figure at Anchor’s new corporate lords), but it is still pretty good. It offers both malt smoothness and holiday spice. Technically, it is very drinkable and should probably appeal to a broader range of palates than previous editions.

Yesterday: It aged very well. Perhaps Anchor should have delayed the release by a year. I did not like this last year but it is very agreeable this year.

Reading through my notes from last year, I obviously missed the spruce this time around. It was probably there and I could not identify it. Honestly, I have that problem a lot; my sense of smell and taste are not as refined as I would like, especially since my diet is pretty basic. While sitting at his kitchen table, contemplating our pints, I asked Bobblehead if he could smell hints of fig. He shook his head. I admitted that my only experiences with figs have been through eating Fig Newtons and he suggested I go to the Co-op and buy some “white Turkish figs.” I will need to do that.

Anyway. My memory of Christmas Ale 2011 is one of disappointment. It lacked the intense spiciness I wanted from a winter warmer. However, having read my notes from last year I get the impression it was better than I remembered. Perhaps I was embellishing, going easy on Anchor. Or maybe not. Either way, I feel the beer aged well. Based on the notes, I do not think it changed much; however, the aroma was much bolder and the flavors stood out.

Unlike with the 2009 I tried a few nights ago, there are still a couple 2011 magnums hanging around the local stores. I know John’s has at least one 2011 magnum and I would recommend picking it up. I have no clue how much it costs because my magnum was a present.

Needless to say, the term “magnum” elicited quite a bit of attention over the past couple days. It was amusing, actually. (You’re pervs! All of you!) Regardless, I think this is the first time I have enjoyed beer from a magnum bottle. It was pretty cool. I could not resist marveling at how huge it was. (Pervs!) Most surprising was the fact it was sealed with a simple bottle cap: 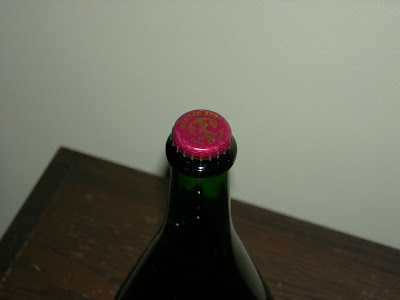 The top was wrapped in gold foil and I assumed it had a champagne-style cork. Nope. It was closed like a simple beer bottle. Very strange.