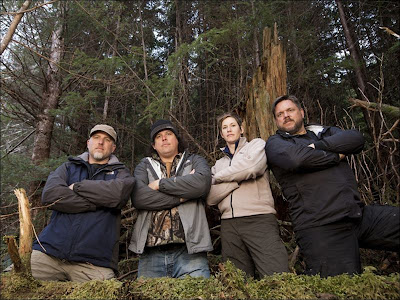 While parked in front of the ol’ boob tube on Wednesday night, searching through the channel guide, I stumbled on a program I have been meaning to watch for months: Animal Planet’s Finding Bigfoot.

My curiosity was piqued by Bobblehead during our trip to Shiloh in April. He mentioned it at some point and, since I had never seen it, outlined its premise and unintended hilarity for me: a group of Bigfoot enthusiasts — including one named Bobo — investigate sightings and spend nights deep in wooded areas searching for and trying to communicate with “squatches.” It instantly became an inside joke between us, especially while we were in the deep woods at Shiloh. During the long and somber “grand illumination,” we shamelessly entertained ourselves by loudly talking about “squatches.” (“This looks like prime squatchin’ territory!” “Yep. There’s got to be squatches in these wood!”) Needless to say, I was eager to see what all the fuss was about. Well, perhaps not too eager since it took seven months before I watched an episode.

In the episode I saw, “Hoosier Bigfoot,” the team — consisting of Bobo (whose real name is James Fay), Matt Moneymaker, Cliff Barackman, and Ranae Holland — is in Indiana. They first investigate sightings in the northern part of the state with no results, then head south to Bloomington and concentrate on a cluster of sightings in a nearby state park. While Bobo, Matt, and Ranae collect eyewitness reports — they even hold a town hall meeting at the beginning of their visit — Cliff spends a couple nights in the woods on a “solo expedition,” basically hanging out at a cemetery (because squatches are apparently drawn to places with short grass, or something like that) and yelling into the timber. His calls are returned by coyotes. But wait! That first call sounded different than the others. Ohhhh — that’s a squatch!

Honestly, though, shows like Finding Bigfoot intrigue me. I have always been fascinated by the paranormal and so-called “unknown.” In elementary school, I always checked-out books on UFOs and strange creatures. My favorite episodes of Unsolved Mysteries involved ghosts, supposed UFO crashes, alien abductions, and Bigfoot sightings. (I was never interested in Elvis sightings, though. Perhaps that is the next Finding show in the pipeline: Finding Elvis. If not, it should be — just for the absurdity.) The In Search of… series was also a favorite of mine; nothing like Leonard Nimoy narrating the mystery of Jimmy Hoffa. In essence, I love these types of shows. On the other hand, though, I cannot resist applying a little skepticism.

Do I believe in Bigfoot? Sure. Why not? But until there is concrete, scientific evidence — none of these blurry videos of what appears to be an eight-foot, hairy creature obscured by thick brush — I will remain open-minded and objective. Which is exactly how I approached Finding Bigfoot. Though, based on what Bobblehead told me, I was expecting to be thoroughly entertained by Bobo and crew.

And I was. Not only does the show appeal to my tame fascination with the unknown, it is also very amusing. A lot of effort is made to heighten the drama since, let’s face it, these people spend hours exploring the woods at night to no avail. They split up, yell back and forth to each other, and bang on trees with sticks — all in the hopes of drawing the interest of sasquatches, who will presumably yell back or jump out and say, “Howdy!” Unidentifiable sounds are met with “Did you hear that?” and “What was that?” Everything is always too soft to register on the mics or obscured by chatter between the cast members. Three hours later… “Well, we haven’t heard anything since that mysterious howl.” (Thank God for editing.)

“Hoosier Bigfoot” was notable because the team used fireworks while at the park outside Bloomington. Bobo said the technique had worked many times before to draw the attention of area squatches, and they even set up a dummy campsite with mannequins. The crew seemed very happy with the results: what amounted to a couple strange sounds in the distance.

One thing struck me as odd during the nighttime wood scenes: each member of the cast is fitted with a night vision camera attached to an elaborate, miniature boom. The thing looked awkward as hell and I have no clue how anyone could navigated the deep woods, with all that thick brush and undergrowth, with something that large. The cast members of Chasing UFOs venture out on similar nighttime excursions and their night vision cameras look nowhere near as cumbersome. However, it did not seem to be an issue because it seemed the Finding Bigfoot crew kept to well-maintained paths and clearings. Odd, no?

Speaking of the crew, I felt Ranae was the most relatable member of the cast. From what I could gather from the episode, she is the skeptic looking for scientific proof; she admitted that she has never seen a sasquatch. (Who really has, anyway?) Everyone else, though, seem to be convinced to varying degrees; the search for scientific proof is just a formality. Bobo, especially, is a Bigfoot dogmatist. He wears a custom-made trucker hat with “GONE SQUATCHIN’” printed on the front and, according to the show’s Wikipedia page, poses as Bigfoot for dramatizations.

The re-creations really annoyed me — at least those using the CGI Bigfoot instead of the furry suited Bobo. The computer generated Bigfoot looked more like a miniature King Kong and was always roaring, slobbering, and baring its teeth. It was a complete contrast to every other Bigfoot depiction I have ever seen: peaceable and extremely shy.

Also annoying were the Pop Up Video-esque, postproduction comments from the cast members. I have no clue if they are a feature of every show, but I hope not. Though sometimes amusing — after Bobo went on record to say that northern Indiana sucked, a diplomatic comment from Ranae popped up to correct him (it did not “suck”; they just did not find any evidence of squatches there) — the comments were distracting. After a while I had to force myself not to read them and focus on the action behind them.

Overall, I was very intrigued and entertained by Finding Bigfoot. It is intrinsically interesting and ridiculous, and I love that. Will I continue watching it? Probably. That is, if I ever find myself watching TV when it is on.