I have a new mid-week drinking rule: I can only drink beer if I am officially tasting for a BotW post. So today, as I happened to be walking past John’s, I decided to grab a beer so I could imbibe after transcribing an interview. And here I am, interview transcribed, with a bottle of Nøgne Ø Winter Ale, brewed by Nøgne Ø – Det Kompromissløse Bryggeri A/S of Grimstad, Norway. 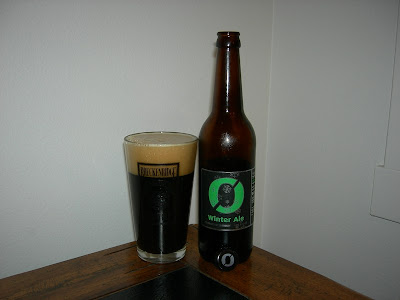 It has been a long time since I drank Norwegian beer so I thought I would splurge on a bottle. In fact, I believe this is only the second time I have ever drank Norwegian beer. The other was Dark Force, brewed by HaandBryggeriet. Let the black metal roar!

Serving type: 500 ml bottle. No freshness date. The bottle cap was quite dusty so I assume it has been sitting around for a while. Hopefully not too long.

Appearance: Poured into a pint glass. The color is very cloudy black; it turned to a murky, deep amber brown when I held it to a lamp. There is quite a bit of sedimentation. Three fingers of dense, cappuccino-colored head dissipated slowly.

Smell: Brandy and a forest along the NorCal coast. Very sappy and evergreenish. The aroma is very intense and boozy, but it also has a very enticing and festive spiciness. Very herbal and woody (as oppose to tinny). Others have pegged it as juniper and I will refer to them. Underneath is a solid malt base of caramel and chocolate, but the spice and booze dominate.

Taste: The booze is completely masked by the herbal, woody spice. (Juniper? Perhaps. It tastes a little like pine, too.) Unlike the smell, though, the malts are much more pronounced and effective; caramel, toffee, and chocolate. The herbal spice and hops leave a subtle bitterness after each sip.

Drinkability: In essence, it tastes like a spiced Christmas wreath. And I have no problem with that because it is tasty as hell.

-Food pairings: Believe it or not, I actually missed listing the food pairing the last couple times, so I have decided to list the food pairings only when offered by the brewery. The beer’s label says Winter Ale is “Great with cheeses, nuts and fruitcake! ☺.” Seriously: there is a smiley emoticon at the end of the sentence.

-In Norway, the beer is known as God Jul.

-Translated from Norwegian, “Nøgne Ø” means “naked island.” The translated name of the brewery is “Naked Island – The Uncompromising Brewery.” Here is a little more description from the label:

The name Nøgne Ø means “naked island,” a poetic term used by Henrik Ibsen to describe any of the countless stark, barren outcroppings that are visible in the rough seas off Norway’s southern coast, where the brewery sits.

The Quiet Man’s grade: A.