In honor of the 1.8 inches of snow we received yesterday (according to this morning’s CRG; I was way off on my estimate last night, but still think we received two to three inches), the beer of the weekend is Yellow Snow IPA, brewed by the Rogue Brewery of Newport, Oregon. 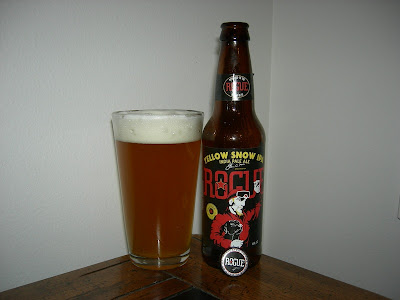 Smell: Muted citrus, which is mostly grapefruit, mango, and orange. The hops offer an earthy graininess and it smells a little skunky, too — which I suppose is fitting.

Taste: Thick, grainy mouthfeel. Loads of bitterness with a tinge of grapefruit and mango citrus. And that is about it. The flavor does not make much of an impression. It is there, but it is mostly inconsequential.

Drinkability: Though there is not much to it, it is okay.

-Here is a little history via the beer’s webpage:

-Also according to the beer’s webpage, Yellow Snow IPA is “available November 1st in select states where mountains and snow can be found.”