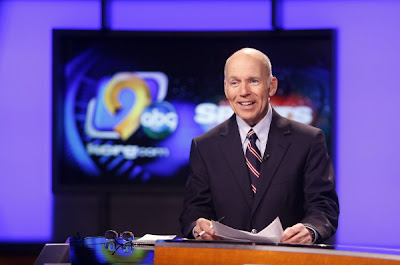 John Campbell, who deftly covered all things sports in Eastern Iowa, signed-off last Friday. He is retiring after thirty-three years at KCRG, though he plans to continue his signature “Big Ol’ Fish” segment.

I did not catch his final sportscast live but was able to watch it online. Both Campbell and news anchor Bruce Aune became very emotional. I am not going to lie: I did, too. Those kinds of era-ending moments always get to me. Though incoming sports director Scott Saville has been with the station a long time, it will not be the same without Campbell. He, along with Aune and longtime weatherman Denny Frary (who retired in 2006), became local media legends during my lifetime; they have been the faces of Eastern Iowa news, sports, and weather for decades. However, the times they are a-changin’. Joe Winters and his crew of meteorologists have firmly established themselves and I expect Saville and his cast of sports reporters to do the same.

I never formally met Campbell but I did brush shoulders with him once. In high school, my Environmental Studies class took a field trip to the KCRG studios. (Environmental Studies was the easy science option. Physics was not required but everyone seemed to take it their senior year anyway. I opted for Environmental Studies. It was easier and offered the exact same credit.) We toured the newsroom and studio and watched Joe Winters deliver a short, midday weather update from the weather desk. (I remember him sitting behind the desk the entire time we were in the room. He did not move; it was like he was bolted down, his elbows on the desktop and hands clasped in front of him. It was hard not to think of Jabba the Hutt.) Anyway, while walking through the newsroom, Campbell entered carrying a camera and wearing a dirty baseball cap. He passed us while we were going somewhere else and we all marveled at how short he was.