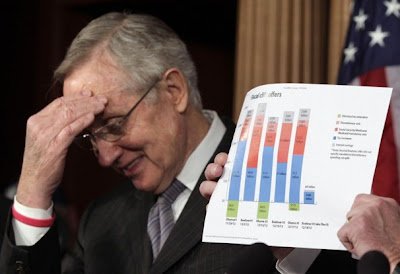 A slew of NFL coaches were canned today — some of which will likely be working elsewhere before the end of the week. (Lovie Smith is the biggest head scratcher. But what can I say? It’s the Bears. I have no clue who the Raiders’ coach is, but in the spirit of Al Davis they should fire the guy just to get Lovie Smith.) To one degree or another, they did not perform to expectations, much like our Congressional “leaders” in Washington. All of them dropped the ball, big time.

We are going over the so-called “fiscal cliff.” Though a deal is being reached in the Senate, the House will not convene until tomorrow, after the deadline. That means automatic tax increases and spending cuts will take effect — at least for a few days.

Honestly, I did not think it would happen. I assumed a last-minute deal, à la the contentious debt ceiling debacle in 2011, would be reached and all the bastards on the Hill would slap each other on the back and talk about how great they are and other such nauseating nonsense. The whole back-and-forth of the last few weeks seemed quite scripted and I expected the theater of rhetoric and finger pointing would be put on hold today for a “historic” accord among the Republicrats, something planned the whole time. It looks like it may happen in the Senate tonight, but we will see about the House tomorrow.

Frankly, the whole point of this is to slip in one last post before 2012 ends. (It was halftime of the “Peach” Bowl when I started this, but I assume the second half has started.) Plus, I have been pretty quiet on the fiscal cliff. My thoughts: the tax increases and spending cuts are something we need to keep the federal government from falling into a ruthless debt tap — at some point, at least. Blue Republicrats want more revenue and Red Republicrats want less spending. Hey! — it seems to me like everyone gets what they want. The timing may not be the best since our economic recovery is so “fragile,” but it is the awful tasting remedy to a decade of financial recklessness.

We are going to have to bite the bullet at some point. If we as a nation (our politicians are not the only ones to blame) were much more sensible and had a shred of foresight, we may not be in this mess. But whatever. It is here and we have to deal with it. The best we can do right now is learn from this great national mistake so we never make it again. If that is too much to ask, we can at least go over the fiscal cliff with gusto. CANNONBALL!