Beware! I am about to ramble on about standing in line at the post office for thirty minutes. Why? Read on.

For work, I have a PO Box and check it a couple times a week. In my little box today was a slip saying I received a piece of mail too large to fit inside; to pick it up, I needed to visit the service counter. I have needed to visit the counter in the past when an overzealous author sends something by certified mail and I need to sign for it. (It is unnecessary and annoying, but I understand the reasoning.) Regardless, I thought that is what the slip was for: a large envelope with a couple pieces of paper. I have been waiting for a copyright form from British Columbia for three weeks and assumed that was what was waiting for me.

So I walked to the side room with the customer service counter and found that the line stretched all the way to the door. It was around eleven thirty and only two postal employees were working. With a couple other errands to run, I thought about leaving and returning tomorrow morning when the post office opens. However, I decided to bite the bullet and stand in line.

Like every other American, I have spent my share of time in line at the post office. I am a patient person, so I really have no problem with it. (I have everything I need in life and many of the frivolous and unimportant things I want. There are much worse things in life than having to wait in line at the post office.) Plus, I understand the USPS is not a national priority and operates as such. Much of it, I think, is on purpose: it seems to be in the best interest of entrepreneurs (some of which are, undoubtedly, politicians) to make our public postal service as lousy as possible and market privatization as the only solution. (Though I am fuzzy on the details, the USPS is apparently an independent company. Somehow. I really have no clue how it works. It seems to fall within a Twilight Zone between private enterprise and the public sector.) So there I waited, patiently, in the line that did not seem to be moving. The room was dead quiet and every sound could be heard; everyone watched in awe as another person (a miracle!) was called to the counter and we could easily hear what they said to the postal worker. People coughed or sniffled, everyone seemed to be looking back at how long the line was becoming.

At the beginning of my wait, a man stood outside the line near the service counter. After helping a customer, a postal worker asked the outlier what he needed. He looked to be a college student and needed to have withheld mail delivered, or something; he had called and someone told him it would be delivered the next day. The outlier wanted to talk to someone but the postal worker told him to wait in line. Long pause. Everyone in the room turned their attention to the situation.

“I want to talk to someone. Can I talk to a manager?” the outlier asked.

“You’ll have to wait in line.”

The guy was a total douche bag. I have no clue if he was from the suburbs of Chicago or not, but he exerted that attitude of privilege and demand for attention and service Chicagoland suburbanites bring to IC. I hoped someone in line would tell the guy to wait like everyone else, and even thought about doing it myself. But nobody said anything. With that exasperated, defeated expression, the postal worker walked to a phone and I could hear his voice over the intercom in the back room. He returned to his booth and beckoned the next person in line. No manager ever showed up and I think the outlier eventually left.

A couple things always stand out to me when I wait at the post office:

-While I am usually there to buy stamps, mail letters to authors in Europe (I guess there is a huge problem there with academics falsifying publication records, so many institutions require proof of acceptance), or send larger envelopes, everyone else waiting in line seems to have a package — which usually has not been closed and has none of the important information written on it, including the address it is being sent to. In general, nobody seems to be prepared and they leave all the work to the postal worker.

-When called to the service counter, nobody realizes there are multiple options for shipment. There does not seem to be, to my amazement, such a thing as “regular” mail or shipping, which everyone seems to ask for (including me). There is “Express” and “Priority” mail, but nothing that sounds relatively simple and inexpensive. Or at least it is not advertised; the USPS emphasizes its flat rate shipping options and nothing else. (The other day my dad called and asked me how much it cost to mail a postcard. I consulted the USPS website and could not, for the life of me, find how much it cost.)

-There always seems to be a couple people who tie up the whole works for about ten minutes. I have no clue why. Postal workers need to consult each other; they disappear into the mysterious belly of the federal building, seemingly take a short break, and return with a single envelope or piece of paper. Problem solved. Next!

So I waited. And waited. And waited. The line moved every now and then, and everyone made slow progress to the front. A woman eventually came to the counter and asked if anyone was picking up packages. Sweet! I thought. I get to get my thing — whatever it is — and leave. She first helped a man who showed her a delivery alert on his cell phone. She disappeared into the back and returned with a handheld barcode scanner and a package. Just as the man was about to leave with the package, he looked at the address and said, “This is not for me.” She asked him for his address. “Is that in Iowa City?” No. Coralville. “Well, it should be at the Coralville post office.” What’s the address? How do I get there? The guy leaves with just the address of the Coralville post office. The woman asks again if anyone is just picking up a package. I show her my slip, hoping to be summoned, but the man standing one person ahead of me walks up to her and says he has not been receiving mail at his PO Box.

Finally, I make it to the front of the line, which is usually where I wait the longest. That has always been my luck. Right before it is my turn for something, or when someone is about to call my name, there always seems to be a short interruption. It just happens and I deal with it. True to form, I stood at the front of the line and waited, watching patiently as everyone else was being served: two people at the far end of the counter and the guy whose mail was not being delivered, who was standing alone since the woman had disappeared once again into the back. After a while one of the customers at the end slung her pursue over her shoulder and walked away. The postal worker carried her packages to a large bin and then, returning to his booth, stuck his arm in the air and beckoned me with his hand.

At last! I nodded when I reached him and handed him the slip. He studied it and then disappeared into the back. When he returned, he handed me this: 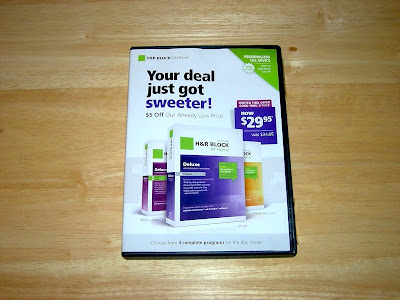 Spam from H&R Block. My jaw dropped. I waited patiently in line for thirty minutes for a disc containing 2012 tax filing software — something I have no need for.

Needless to say, my uncle will be doing my taxes again this year.