Though I have two future BotW beers chilling in my fridge — a bottle of Founders’ fifteenth anniversary ale, Bolt Cutter, and a sixer of Anchor’s 2012 Christmas Ale — I do not feel like drinking either this weekend. Bolt Cutter’s ABV is a whopping 15 percent so I would like to share it. Also, I have decided to hold Anchor’s Christmas Ale until Christmas Eve. Besides, I spotted a new offering from a brewery just down the road. (It is new to me, at least. I just saw this blog post, written by a former Great River brewer, from October 2011.)

The beer of the weekend is Big Cock IPA, brewed by the Great River Brewery of Davenport, Iowa. 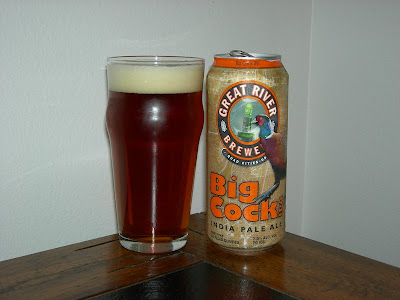 Appearance: Poured into a nonick pint glass. The color is copper with a light orange hue. Two fingers of dense, eggshell-colored head dissipated slowly, leaving a spotted lacing, ring around the edge, and trails of foam along the glass.

Taste: It offers a nice citrus flavor without the “bitter beer face.” The mouthfeel, though, seems a little coarse and it does offer a nice bitterness. Grapefruit, tangerine, orange, and lemon. It also offers the earthy hops, pale malts, caramel, and toffee of British pale ales. As it warms, the caramel becomes a little more candy-like and the bitterness beings to linger after each sip.

Drinkability: This beer is solid. It offers a lot of citrus and balance at the same time. Very well-crafted brew.

-Alcohol content: 7 percent ABV. What is with Great River and 7 percent ABV? Farmer Brown Ale also has an ABV of 7 percent, which is why I try not to drink too much of it.

-Written on the ring at the top of the label is “Obey state and local regulations Please hunt responsibly.”

-Nerdiness from the can:

Changing habitat conditions have taken a toll on the population of the beautiful and delicious ringneck pheasant. We donate a portion of the sales of our IPA to Pheasants Forever and named it as a prompt to other outdoorspeople to continue that support. True to the style, our IPA is brewed with pale malt and fiercely hopped, the perfect beverage after a day afield.

That has to be the best written exposition I have seen on the side of a beer can. I do not hunt and I have nothing against reasonable, conservative, recreational hunting, but note that no blame is laid on hunting for taking a toll on the ringneck pheasant population. Interesting, no?