Another night, another edition of Anchor’s Christmas Ale.

The beer tonight is my last Anchor Christmas Ale 2013, brewed by the Anchor Brewing Company of San Francisco, California. 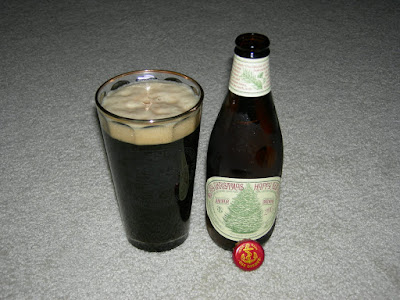 The color is deep brown. A finger and a half of dense, buttery, cappuccino-colored head settles slowly, leaving a frothy ring and skim, and short trails of lacing. The first whiff is spicy and festive. Cinnamon, ginger, and nutmeg are prominent, and toasted malt and cherry licorice are also present. There seems to be a hint of brown sugar and maybe cocoa. The mouthfeel is full and creamy. The toasted malt and spice coat the taste buds in a nice bitterness and astringency. There are flavors of tasted malt, cinnamon, nutmeg, ginger, peppermint, cocoa, and dark fruit. Honestly, it tastes a lot like the bottle of 2014 I drank last night. The toasted malt and cocoa seem like they gain prominence, but then the spice storms to the forefront.

Comparison to 2013 and 2014 tastings: This is no longer a “Christmas tree in a bottle” — as I mentioned last year. However, unlike last year, the arboreal characters have faded completely. Cinnamon has become the dominant flavor and aroma. I wrote last year that the flavor is much more balanced than it was in 2013, and that nothing stands out or dominates. In 2015, however, the flavor pendulum has swung back toward spice dominance. Thankfully, though, it does not have that odd flavor of flat Coca-Cola that is sometimes common with these aged Christmas Ales.