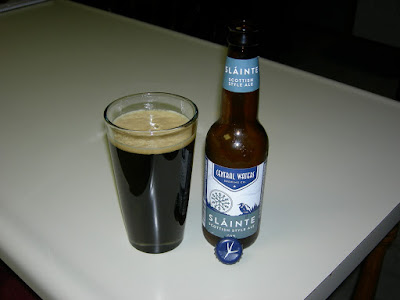 Sláinte pours a dark brown that leans toward black into a pint glass. A finger of tan-colored head leaves a couple bubbles, a broken skim, and a bubbly ring around the edge. The aroma is dominated by toasted malt with peat and smoke characters. Caramel is also noticeable. It has a whiskey-like element reminiscent of barrel-aging, though I do not think it is barrel-aged. Cocoa is also present. The mouthful is full and the flavor is toasty like the aroma. Peat/smoke is present. Again, it has a whiskey element. There is a little caramel and cocoa is also present. The toasted and smoked malt characters coat the taste buds and their flavors linger long after each sip. The aroma and flavor make me think the beer is boozy, but it isn’t. Or at least I don’t think so; the ABV is not listed on the bottle.

• Alcohol content: BA pegs the ABV at 7.5 percent. No wonder I got the impression it was boozy.