The Christmas Eve tradition will continue tomorrow night. A six-pack of you-know-what is chillin’ in the fridge and I am eager to try it. Honestly, though, I’m not sure why I am so eager. The last few editions of you-know-what have not been spectacular. Frankly, I do not think they have changed much. Perhaps, though, it is the tradition that’s exciting me.

Anyway, the latest edition of you-know-what comes tomorrow night, and the weekend will bring a few vintages. 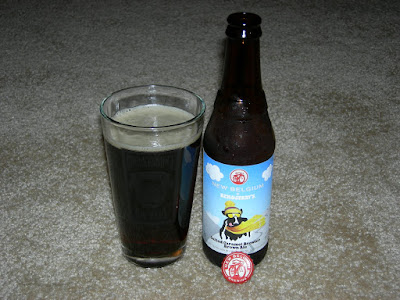 The beer pours a mahogany brown into a pint glass. A finger of light tan head does not stick around for long and leaves spots of bubbles, an uneven skim, and a ring around the edge. The first couple whiffs are dominated by toasted malt. It definitely smells like a brown ale, but it also smells like freshly baked brownies. Well, maybe not freshly baked — more like brownies that came out of the oven a half-hour or so ago and have cooled on the kitchen counter. Regardless, I am enticed. The flavor mostly mirrors the aroma with toasted malt and enticing brownie goodness. It is a touch salty, the toasted malt leaves a lasting flavor on the taste buds, reminiscent of singed toast, and alcohol is noticeable. Caramel and dark fruit are also noticeable. This is a tasty and drinkable beer. I especially like the brownie characteristic; it is something that is unique in my beer tasting experience. Other than that, though, it is a decent brown ale.

• Alcohol content: 6.25 percent ABV is written on the label, but the beer’s webpage pegs the ABV at 6.3 percent.

• Obviously, it is a collaboration with New Belgium and Ben & Jerry’s.