The beer tonight is a Wasatch Brewery brand beer brewed by the Utah Brewers Cooperative of Salt Lake City, Utah, that I have not tried before: Polygamy Nitro Porter. 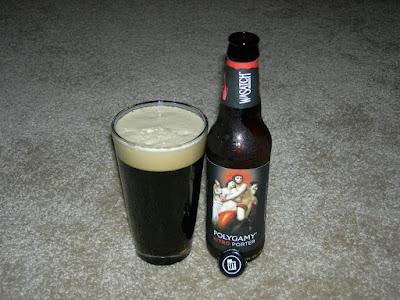 The beer pours a very deep brown color that is leaning toward black into a pint glass. A little more than a finger of dense, light tan, nitro-style head sits atop the beer. It dissipates very, very slowly, though. The aroma has a pleasing roasted character. It also has that nitro smoothness. Other scents include coffee, milk chocolate, light caramel, and cherry licorice. The mouthfeel is smooth and velvety — very true to style. The roasted character is prominent but muted and somewhat distant like it usually is with nitros. The flavors are there, though: milk chocolate, light caramel, and roasted malt, which leaves a nice bitterness on the taste buds. There is a hint of dark fruit.

• Polygamy Nitro Porter is the nitro version of Polygamy Porter, which I have not tried yet.