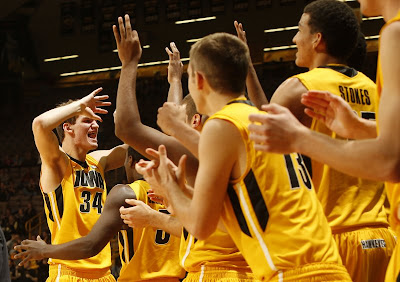 Before tonight’s game, I told my dad we could leave at halftime if it turned into a blowout. Of course, little did I expect the Hawkeyes to be getting blown out at halftime but that is exactly what happened. With the Hawkeyes down 38-18 after the first twenty minutes, my dad and I left.

Sure, the Hawks were playing like shit and a well-seasoned Gardner-Webb team was capitalizing on every miscue and winning every fifty-fifty ball. But that was only half of the reason we left: we both wanted to watch football. Football season is, sadly, winding down and I want to enjoy it while I still can. So leaving Carver with the Hawks down twenty at halftime seemed like the logical thing to do. When I got home, though, I muted the Kansas State-Baylor game and listened to the Hawks’ improbable comeback on the radio while cooking dinner.

Walked back to our car after leaving the arena, dad said, “Wouldn’t you love to be a mouse in the locker room at halftime, just to listen?” Iowa coach Fran McCaffery was probably not a happy camper and I was sure he let his players know it. However, I could not even imagine what kind of adjustments could be made. Gardner-Webb was impressive. Everyone in the area was shell-shocked by their quickness, agility, pass efficiency, and suffocating defense. Iowa’s bigs could not find an inch of space and no one was open outside. It helped that none of the Hawkeyes could find the basket; even the high percentage lay-up was not falling for the Hawks. It was pathetic and everyone was sure this was the “Campbell” of the 2012-13 season. And Gardner-Webb is no push over. They beat DePaul recently and played North Carolina in the first game of the season. They were battled tested and pushed the Hawks to the brink.

However, the second half was a completely different story. The second half must have been a sight to see as the Hawks battled back, point by point. It was one hell of an effort.