Yes, I know: there has been little substance on The Quiet Man this week. Football, basketball, and now beer. I have a couple reviews in the queue so I will try to write those soon.

Though I still have two beers left in my birthday six-pack (which included two beers I already tried), I decided to get festive tonight. Normally I sample a number of winter/holiday releases for my December recommendation in the LV, but this year I tried none because I knew exactly what I wanted to recommend. Needless to say, I am thirsty for the usual suspects and picked up a little something while buying a thirty-pack of PBR today.

The beer this weekend is Snowstorm 2012, brewed by the August Schell Brewing Company of New Ulm, Minnesota. 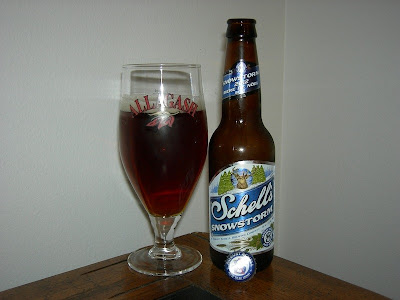 Serving type: 12-ounce bottle. There are batch codes on the shoulder of the bottle but no discernable freshness date.

Appearance: Poured into a tulip. The color is dark amber. Two fingers of bubbly head dissipated quickly to leave a spotted lacing and bubbly ring around the edge.

Smell: Nice and spicy. It smells like Schell hijacked a batch from Unibroue and bottled it for themselves. Cloves and sharp pepper spice, lemon citrus, a little fruit (mostly banana and apple), and yeast.

Taste: It mostly mirrors the smell. The sharp clove and pepper spice lead and are followed by orange and lemon citrus, a hint of apple, and the yeast.

Drinkability: Whoa! This is from Schell?! The brewers there go all out with each new Snowstorm and I have to give them a deserving round of applause. Well done!

-Style: Schell calls it “Biére de Noél,” which is French for “Christmas beer.”

-Here are the “flavor/color profile” notes from the beer’s webpage:

A French style Christmas beer. Expect a light amber beer with red tints that is malt forward with noticeable yeast flavors of white pepper and citrus from an authentic French ale yeast. Slight herbal hop note in the background, with a spicy, citrusy, peppery aroma.

My thoughts exactly (or so I say before I even open a bottle).