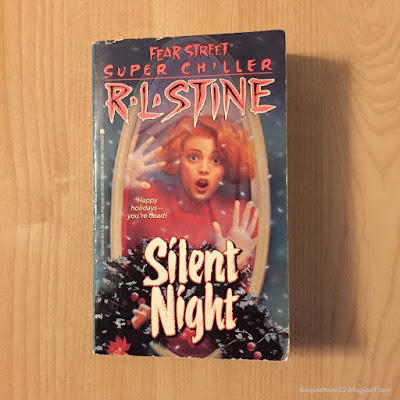 Rawson raised a hand to cut him off. “I said I don’t want to hear about it. Settle it after work, okay? Go out to the parking lot and beat each other senseless. But at least wait until Robb is out of costume—okay? That’s all we need is for kids to see the Dalby’s Santa Claus in a fistfight with a stock clerk.” (p. 178)

Silent Night is proof that the horrors of Fear Street never take a holiday — even Christmas.

Part of the “Super Chiller” series that is supposedly scarier and gorier than the regular Fear Street books, Silent Night tells the story of two cousins separated socioeconomically and their ties to mysterious events that take place during the holiday shopping season.

While working at her father’s department store over winter break, the snobbish Reva Dalby revels in the mind games she plays with her classmates and co-workers. However, the fun ends when someone starts playing with her.

Meanwhile, Pam Dalby, Reva’s cousin who lives in the Old Village area — where all the poor people in Shadyside live, apparently — has started hanging around two unsavory characters. Pam is tired of being mistreated and belittled by Reva, and is extremely peeved that Reva did not tell her about the holiday jobs available at her uncle’s department store. She wants revenge and becomes a hesitant co-conspirator in what is supposed to be a foolproof plan.

What ensues are cruel pranks, a robbery, and two murders.

Silent Night is definitely full of intrigue. One thing these Fear Street books do, to varying degrees and effect, is sustain suspense until the end when the mystery is untangled. Sure, a lot of loose ends are often left hanging, but the stories keep one wondering, trying to make connections. Silent Night did just that. To be honest, I had no clue how the story would be resolved, how everything would be explained. The puzzle of Silent Night may be completed with a couple unexpected, “off-screen” elements introduced at the end of the book, but at least it’s completed.

One plot twist was especially interesting: two characters turn out to be the same person. When that is revealed, I could not help but stop reading and contemplate its absurdity. It works, and doesn’t turn out to be that big of a deal in the end. But it’s laughable and stupid.

Silent Night is the first book in the Super Chiller series that I have read. According to Wikipedia, there are 13 in all, including two more Silent Night books. As mentioned above, I once read somewhere that the series is supposed to be scarier and gorier. Does Silent Night live up to that promise? Not really. The writing is better and the characters are riskier and much more developed. Reva is especially well developed, making her easy to hate. Silent Night is much longer than the books in the regular series, though — 216 pages versus the usual 150–165 — so that was the biggest difference. Probably the scariest thing in the book is this note Pam receives from her mother:

The note read: “Your father still insists on paneling the den. I’ve gone with him to the lumber store so he doesn’t pick anything too ghastly. Back soon. Love.” (p. 136)

It’s scary to think there are people out there that still like wood paneling. Yikes!