The beer of the weekend is from a newer Iowa brewery that I had yet to drink anything from: Lowbrow Brown Ale, brewed by the NoCoast Beer Company of Oskaloosa, Iowa. 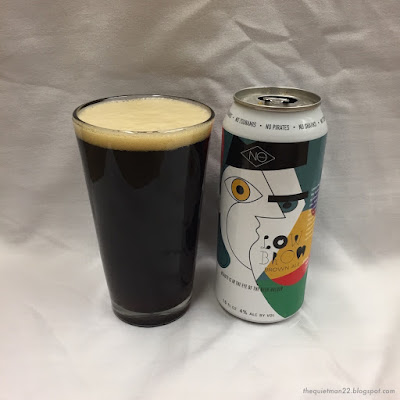 The color is deep brown with tones of red where light passes through the glass. A half-finger of buttery, tan-colored head leaves a skim and ring around the edge. It smells like a brown ale — which is always a good sign for a brown ale! It’s toasty and nutty with scents of toffee, caramel, and cocoa. Cherry licorice is also present. The mouthfeel is creamy and smooth, just like it came from the tap. The flavor mostly mirrors the aroma, though the cherry licorice is more prominent, making the beer sweeter and fruitier. Nonetheless, there are also flavors of toasted malt, caramel, toffee, and cocoa. There is also a touch of smoke, too. It’s easy drinking and tasty stuff. Small chunks at the bottom of the glass are evidence of sedimentation.

• Here’s the description featured on the can and brewery website:

Leave that highfalutin fine art at the museum, and take a moment to admire the masterpiece before you. Produced with English malts and yeast, the Lowbrow Brown Ale is reminiscent of Western European styles. We kept the ABV of this malty brew low, so you can enjoy both quality and quantity. Ale this galley-worthy gives a whole new meaning to 99 bottles of beer on the wall…

• Nerdy copy editor question: Is it “lowbrow” or “low brow”? According to my MacBook dictionary, and the Merriam-Webster app on my phone, it’s “lowbrow.”

• Since this is the first time I have tried a NoCoast beer, I want to include the brewery’s “middlefesto”:

NoCoast says no to know-it-alls and up yours to one-uppers. We care about the next beer, not the next big thing. You in? Put your foot down, raise you glass, and join us in reciting the credo of the NoCoast nation: Friends before trends! Land over sand! Beer over everything!

• Craft beer in Oskaloosa? Yep! Not only is it home to NoCoast, Oskaloosa’s Cellar Peanut Pub is considered one of the best bars in Iowa.