Traditionally, I drink Anchor’s latest Christmas Ale on Christmas Eve. However, with a fridge already full of beer — including a mini-keg of Breckenridge’s Christmas Ale, which I have yet to tap — I decided to postpone the tasting. That means the beer this weekend is Anchor Christmas Ale 2016, brewed by the Anchor Brewing Company of San Francisco, California. 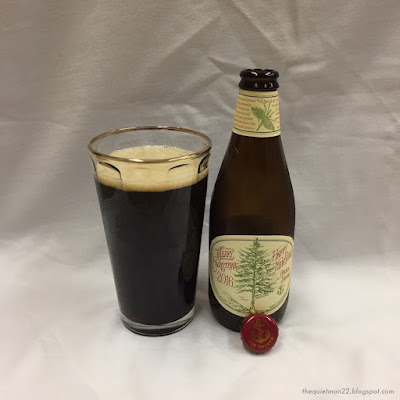 The color is deep, dark mahogany. It looks almost black. A finger-width of tan head leaves a skim and ring around the edge. The aroma features a lot of brown malt; it’s toasty with scents of caramel, toffee, and cocoa. There is also a light scent of dark fruit reminiscent of cherry. It also has that flat Coke aroma, which isn’t that unusual for these beers. The first sip is surprisingly spicy. It’s arboreal but also herbal, and also very seasonal. It’s boozy, though I don’t think the ABV is very high. There are flavors of cinnamon, pine, caramel, toast, toffee, nutmeg, and dark fruit. It is definitely a complex brew — the most complex of the Christmas Ale series in a long time — and I’m drawing a lot of blanks. Reviewers on BeerAdvocate mention ginger, fruitcake, banana, fig, raisin, and cedar chips. (I am one of the fortunate souls that has never been subjected to fruitcake, so I can’t vouch for that flavor.) The nutmeg and toast become more prominent as the beer warms.

• Here’s the story behind the tree on this year’s label:

Our tree for 2016 is the “1,000 Mile Tree” or the lone pine found during westbound construction of the transcontinental railroad. Discovered in 1869, it was a lone pine amidst a vast and desolate landscape. The tree on this year’s label was hand-drawn by Bay Area artist James Stitt, who has been creating Anchor’s Christmas Ale labels since 1975. His charming illustration of the 1,000 Mile Tree includes a person at the top of the tree with a mug of beer, honoring an old legend that railway passengers sometimes attempted to climb the tree.

• Of course, the back label features Anchor’s distinctive bottling date code — no doubt one of the best examples of cryptic and stupid freshness dating in the brewing industry. Sure, Anchor provides a webpage to decipher the code, but it would be much better if they printed a month-day-year date instead. Hell, I would even take day-month-year over the code.