Last week, my sister’s friend and her husband from Australia were in town. He wore a Hamm’s logo t-shirt one day and I offered my compliments. He said he liked buying cheap, beer-related shirts while in the United States and mentioned that he didn’t even know if Hamm’s was a real beer.

Later on, after they had left town, I began to wonder: Has Hamm’s ever been the beer of the weekend? To my surprise, it hasn’t … until now.

The beer of the weekend is Hamm’s, brewed by the Hamm’s Brewing Company of Milwaukee, Wisconsin, a subsidiary of MillerCoors. 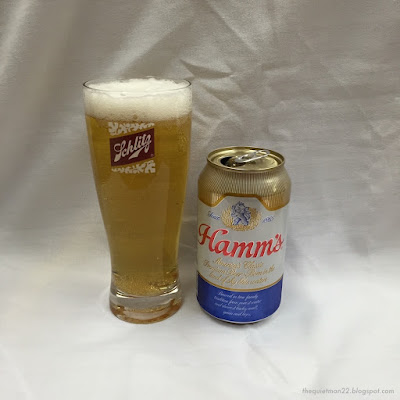 The color is clear, clean light gold. A little more than a finger of white, fluffy head, ideal for a TV commercial, leaves an even skim and thick ring around the edge. The aroma is mostly grains and features a light zest. It has that classic, dive bar beer scent, the kind that is served in a tall, handled mug that should never be used to serve beer. The flavor mostly mirrors the aroma — grainy with a touch of zest. It also features a light, pleasant bite. It doesn’t taste like corn, but it could be brewed with rice and maybe actual malt. Overall, it is light, tasty, easy drinking, classic American beer.

• Price: I forgot to grab the receipt, but I think it was $9 for a 12-pack of 12-ounce cans at the Drug Town on First Avenue in Iowa City.

• Hamm’s is famous for its advertising jingle and mascot, the Hamm’s Beer bear. A YouTube search for Hamm’s will give you a number of old commercials featuring both. It’s pretty catchy stuff — which probably explains why the bear and song are forever etched into the memory of my parents, aunts, and uncles. I suppose the Hamm’s bear is like the Spuds MacKenzie for Midwestern baby boomers.