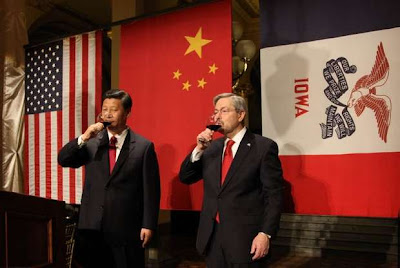 There is really no way to sugarcoat it, no matter how much Iowa’s media drools over meaty memories of Star Trek posters and prepubescent readings of Twain: Iowans kissed Xi Jinping’s ass — majorly.

Jinping, China’s Vice President and supposed heir apparent to the People’s Republic’s top post (I cannot remember the title or even who holds it), flew to California last night after a whirlwind, two-day tour of the Hawkeye State. The media and government hyped it as a nostalgic return: Jinping visited Iowa in 1985 as a feed cooperative chief and humbly “wandered the state in [a] simple van, and bunked in Iowans’ bedrooms” as he visited farms and picnicked with farmers. It was his first trip to the United States and Iowans shaped his first impression of the country and its people. Xi, as Iowa Public Radio and the DMR have referred to him, apparently had very fond memories of Iowa and was invited back by Governor Terry Branstad. He accepted the invitation and landed Wednesday in Muscatine to great fanfare and much brown-nosing.

While eating dinner at Polly’s Pies with my uncle a few years ago, I could not help overhearing the conversation at a booth across from us. A family of four sat there, and among them was a teenage girl quizzing her parents about things she learned in school. She asked, “Did you know America is the only superpower left?” I do not remember what her parents said, but it was plain to me that, unsurprisingly, idealistic American exceptionalism is alive and well in the OC. If the United States is the only remaining superpower, I cannot help wondering what she, her teachers, and her parents make of the grandiose and lavish treatment of Jinping and his boss — and our blatant whoring and appeasement.

(For anyone visiting SoCal, I highly recommend tracking down a Polly’s. The food is good, the Friday clam chowder special is excellent, and the pies are to die for.)

On Wednesday night, Jinping was the honor of a state dinner — where guests “couldn’t move about without an escort once they were seated.” (I cannot help wondering if any Iowa beer was on the menu. I seem to remember the DMR mentioning Madhouse Pale Ale.) Branstad kindly dismissed China’s awful human rights record and claims of industrial piracy as problems for administrators in DC. (I find it incredibly ironic that a red Republicrat graciously welcomed and honored a communist and referred to China as a “great nation.”) Jinping met acquaintances from his ’85 visit and toured farms. For two days, IPR was abuzz with his latest movements and the DMR seemed to track his every step. Yesterday, the paper’s coverage of his visit included this graph:

The Chinese vice president’s trip here is the most significant showcase in foreign politics since Pope John Paul II’s sermon here in 1979 and Soviet Premier Nikita Khrushchev’s 1959 stop at a farm near Coon Rapids amid tense Cold War posturing.

Jinping was treated like a powerful man we desperately need to impress, and I suppose that is becoming given our economic woes. Unlike our overall trade trend with the Chinese, “there’s a hopeful storyline in grain and livestock as exports boom. No foreign country bought more agricultural goods last year than China, and Iowa farmers and landowners profited.” China, the DMR article stated, recently committed to buy $4.3 billion more in Iowa soybeans.

Frankly, I am torn. I think it is proper to treat foreign dignitaries respectfully, just as we would want to be treated abroad. However, Jinping is poised to lead a brutal totalitarian regime, which does not give one hoot about the personal freedoms coveted by the west. China’s economic emergence has come at a staggering cost both for itself and others: its cities are shrouded in thick smog, its rivers are toxic, its people are exploited for low-wage work, its dissidents are silenced, its technology is pirated. Should we honor people like that just because they have money and control vast, potential markets for our products? Should we suspend our morals to do business with profiteering thieves, polluters, and exploiters? Terry Branstad thinks we should. After all, people need to eat whether they are repressed or not.