Beer of the Weekend #329: Foster's Lager

Until last week I had completely forgotten about my Great Adjunct Adventure. It has been on hiatus since August (BotW #266: Bud Light) so I decided it was high time to resurrect it. From now on I want to set aside at least one Friday every month for a GAA tasting so I can enjoy a past favorite, guilt free. (A recent re-taste of Ayinger Weizenbock got me craving wheat beer so I bought a couple half-liter bottles of Franziskaner.)

As I did at the beginning of the GAA (though unintentionally), I want to start off with a regular macro instead of beer-fortified water. I will move on to those next to get them out of the way early. Tonight I am going “down under” and am surprised I have not reviewed this beer before. The beer of the weekend is Foster’s Lager, brewed by the Foster’s Group Limited of Southbank, Australia. 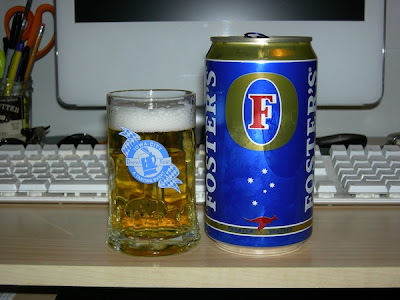 Though everyone knows it simply as “Foster’s,” its proper name is “Foster’s Lager.”

Tonight I am using my 200 ml Iowa City Brew Fest tasting mug. I want to showcase the color and access the scents and flavors without the aluminum interfering, so the sampling mug will do just fine. Then I will hit it straight from the can.

Appearance: Poured into a 200 ml sampling mug. The color is clean, clear straw. Two fingers of white head dissipated slowly (surprisingly) and left a ring of foam around the edge.

Smell: I think this one is corn-based. Very light malts and tons of sweet adjunct. It also has a light perfume smell.

Taste: It basically mirrors the smell, and the corn-heavy malt bill is very noticeable. There are a few light malts and it has a small bite.

Drinkability: I think the can is what provides most of the flavor. It is not offensive and is a decent lawnmower beer. Now I know why Australians don’t drink it. Enough said.

-Alcohol content: There is no consensus among my sources, but all peg the ABV a tenth or two around 5 percent.

-Here is some interesting history regarding the “oil can” from the Foster’s website:

Foster’s 25.4 oz. cans arrived in the U.S. in 1972. They resembled motor oil cans so, naturally, Americans nicknamed them “Foster’s Oil Cans.” And the name’s stuck every since. Truth is, we quite like it. Almost as much as we like what’s inside.

-My cousin studied for a semester or two in Australia in 2000, and Foster’s was served at her sending off party. I was still too young to drink (in front of my parents, at least), but everyone else at the party seemed to like it; it had a lot of bite, they said. Everyone drank it from bottles, and I remember my mom calling it “dark beer.” So sad.