The Bookworm: Pieces of the Frame 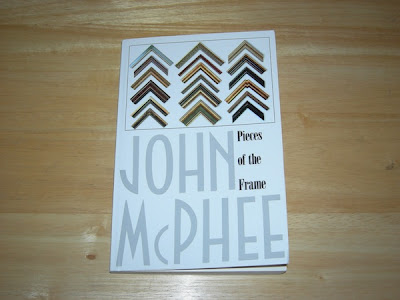 All of us looked now at the family that was having the birthday picnic, for the father had stood up shouting and had flung a large piece of the birthday cake at his wife. It missed her and spattered in bits in the branches of a tree. She shouted back at him something to the effect that he was depraved and cruel, and he in turn bellowed that she was a carbon of her bloody mother and that he was fed up. She said he had had all she could ever take, and was going home — to England, apparently. With that, she ran up the hillside and soon was out of sight in the pines. At first, he did not follow, but he suddenly was on his feet and shouting serial threats as he too went out of range in the pines. Meanwhile, their children, all but one, were crying. The one that wasn’t crying was the girl whose birthday it was, and she just sat without moving, under a conical orange hat, staring emptily in the direction of the lake. (Page 97.)

For Christmas I bought Encounters with the Archdruid at Prairie Lights for a friend. While at the front counter, the cashier asked me, “Did you see McPhee when he was here?”

I froze. My eyes almost popped out of my head. “McPhee was here? When?”

She paused to think. As I stood there, eagerly awaiting her answer, I hoped she would say he visited before my return to IC. Alas: “I think it was November or December of last year [2010].”

My God. McPhee — the only author whose reading I would eagerly want to attend — was in Iowa City and I missed him. Unbelievable. This is what I get for not checking the local reading schedules.

(For whatever reason, I always want to say his name à la Marty McFly’s supervisor, “The Jitz,” in Back to the Future Part II: “MCPHEE!” (I swear I would not have done that had I gone to his reading. It would have been very tempting, though.) ANYWAY…)

Pieces of the Frame is a collection of 11 pieces of literary journalism McPhee published between 1963 and 1975; the articles originally appeared in the likes of The Atlantic (now forever tainted in the eyes of Iowans), The New Yorker (posh, pretentious, and revered), and Playboy (the rumor is true: Playboy prints really good articles). Each is classic, curious McPhee; the subjects range from Scotch whiskey, to firewood, to the All-American Futurity, the world’s richest horse race. “Pieces of the Frame,” the book’s namesake essay, is about McPhee’s family trip to Loch Ness, which the opening quote was lifted from.

Unlike my past experiences with McPhee’s writing, I was not blown away by Pieces. Along with my favorite stories — most notably “The Search for Marvin Gardens,” “Basketball and Beefeaters,” and “Ruidoso” — Pieces includes a couple complete bores. “Travels in Georgia,” “From Birnam Wood to Dunsinane,” and “Firewood” are well-written and interesting, but they did not appeal to me. “Centre Court” was 37 pages of everything I never wanted to know about the Wimbledon tennis championship. After reading 10 pages, I flipped ahead hoping it would end soon. Nope. Again, it was interesting — but goddamn! The one good thing about “Centre Court” was this description of Clark Graebner, which I am sure was the inspiration for Dos Equis’ “Most Interesting Man in the World” commercial campaign:

Above his mouth is a mustache that somehow suggests that this man has been to places most people do not imagine exist. (Page 165.)

However, regardless of their appeal, all 11 pieces exhibit McPhee’s mastery of syntax and composition. The segues between scenes and subjects are the definition of seamless. As far as I can recall, there is not a single awkward sentence in the whole book; everything is understandable and fluid. Though not as impressive to me as Uncommon Carriers or Encounters with the Archdruid, Pieces is nonetheless a shelf-worthy collection of masterful literary journalism and nonfiction.

A selection of the new words I learned: All definitions courtesy of my MacBook dictionary. Gorp: “another term for trail mix.” Plastron: in this instance it means “the part of a tortoise's or turtle's shell forming the underside.” Scute: “the short tail of a hare, rabbit, or deer.” Loblolly: “a pine tree of the southern U.S. that has very long slender needles and is an important source of timber.” Bole: “the trunk of a tree.” Dermestid: “a small beetle of a family ( Dermestidae) that includes many kinds that are destructive (esp. as larvae) to hides, skin, fur, wool, and other animal substances.” Simonize: “polish (a motor vehicle).” Kneehole (used as “kneehole desk”): “a space for the knees, esp. one under a desk.” Prognathous: “(esp. of a person) having a projecting lower jaw or chin.” Effrontery: “insolent or impertinent behavior.” Parboil: “partly cook (food) by boiling.” Otolith: “each of three small oval calcareous bodies in the inner ear of vertebrates, involved in sensing gravity and movement.” Bateau: “a light flat-bottomed riverboat used in eastern and central North America.” Codpiece: “a pouch, esp. a conspicuous and decorative one, attached to a man's breeches or close-fitting hose to cover the genitals, worn in the 15th and 16th centuries.” Butcher block: “a material used to make kitchen worktops and tables, consisting of strips of hardwood glued together.” Monadnocks: “an isolated hill or ridge or erosion-resistant rock rising above a peneplain.” Abrade: “scrape or wear away by friction or erosion.” Ogee: “having a double continuous S-shaped curve.” Roughcast: “plaster of lime, cement, and gravel, used on outside walls.” Grampian: “a former local government region in northeastern Scotland, dissolved in 1996.” Odium: “general or widespread hatred or disgust directed toward someone as a result of their actions.” Synecdonche: “a figure of speech in which a part is made to represent the whole or vice versa, as in Cleveland won by six runs (meaning “Cleveland's baseball team”).” Ne plus ultra: “the perfect or most extreme example of its kind; the ultimate.” Lissome: “(of a person or their body) thin, supple, and graceful.” Silviculture: “the growing and cultivation of trees.” Futurity (as in “futurity race”): “a horse race for young horses for which entries are made long in advance, sometimes before the horses are born.” Pari-mutuel: “a form of betting in which those backing the first three places divide the losers' stakes (less the operator's commission).”