I have ordered three of the four season sections of my novel and plan to wrap up this latest outlining adventure tomorrow. Tonight, however, I am in a celebratory mood (the Hawks won at Nebraska!) and am in possession of a delightful discovery I made yesterday at New Pi: Sprecher Black IPA, brewed by the Sprecher Brewing Company of Milwaukee, Wisconsin. 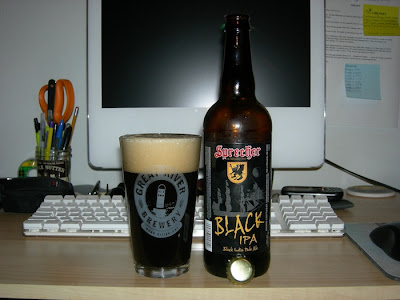 Interestingly — and somewhat alarming — Black IPA has no presence on the Sprecher website. None. It is not listed among Sprecher’s seasonals, “Premium Reserve,” or limited release beers. I am unsure what that means. Elsewhere online, though, I found pages referring to the release as a 10-case “small batch” with availability limited to southeastern Wisconsin. That was last year, though. How old is this bottle? Your guess is as good as mine. Thankfully, though, hops preserve beer.

Serving type: 22-ounce bomber. There is a hand-written batch code at the bottom of the bottle: “11350.” No easily discernable freshness date, though.

Appearance: Straight pour into a pint glass. The color is non-opaque black; light easily passed through and turned the beer amber when held to a lamp. Three fingers of dense, buttery head dissipated unevenly to leave a rocky cap with deep canyons of foam. A lot of foam was left clinging to the side of the glass, too.

Smell: Mostly reminiscent of the beer’s IPA inspiration. Invigorating pine and grapefruit/orange citrus dominate, but underneath are toasted caramel and chocolate.

Taste: It has an odd, though agreeable, taste. The citrus and pine aside, the grassy hoppiness and astringency are what stand out the most. It is more mouthfeel and bitterness than flavor, really. The dark malts are there, but they are mostly overpowered by the hops. As the beer warms the mouthfeel becomes much smoother, reminiscent of the beer’s maltier namesake.

Drinkability: This is definitely black IPA in the sense it is black-colored IPA. Tasty stuff, but very unbalanced.

-Price: Shit! I forgot to nab the receipt. (On a related tangent, I hate how most New Pi cashiers always ask if you want the receipt.)

-As mentioned above, the bottle features a hand-written batch code. (My little digital is horrible at taking close-ups so I was unable to take a focused photo.) I have no clue what it means, but I think this is as BotW first. Interestingly, another BA reviewer mentioned the same batch code in his review.