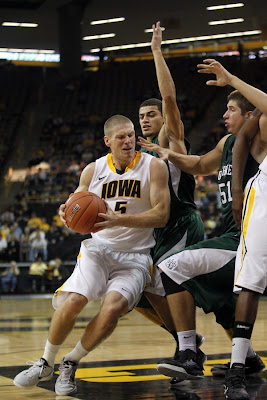 This weekend was dominated by Hawkeye sports. Yesterday I attended the nail biter at Kinnick and today I watched Iowa’s men’s basketball team win a challenging exhibition against Northwest Missouri State, 79-59.

Based on the player interviews I have seen, head coach Fran McCaffery wanted to test his team with a solid opponent. The Bearcats obliged, giving the Hawks headaches on defense and the glass. Part of it looked to be a lack of focus and desire for the Hawks. Nobody crashed the boards in the first half; after missing shots, the Hawkeyes conceded the ball to the Bearcats and were halfway down the court setting the defense before the ball was rebounded. Stocked with veterans and a good point guard, the Bearcats were smart, quick, and physical, and they gave the Hawks all they had to give. The Hawks, on the other hand, looked lethargic. The Hawks’ lead was only nine points at halftime. Iowa battled inside for rebounds and pressed in the second half, and came away with a “comfortable” victory, though the game will not be officially recorded.

Obviously, this was no typical exhibition game. Normally, a lower division cupcake is brought in for what is essentially a full-dress scrimmage. But this was a game. Though the players may have expected a stiff challenge, the fans were blindsided. I think we all expected something much different, something more akin to usual preseason beat downs. However, this was much preferred in terms of preparation. The Hawks’ true season opener is next Friday against Chicago State.