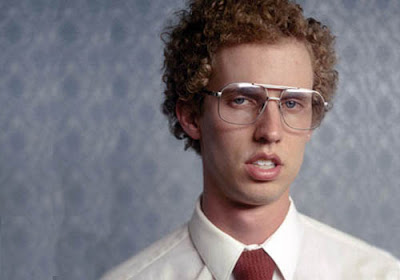 Way back whenever it was (probably around a year ago), I “borrowed” Bobblehead’s copy of Napoleon Dynamite. It was in a stack of DVDs he and his wife planned to pawn, and they kindly offered it to me since I had never seen it. That night I put it on my desk and it stayed there for months. At some point before moving in with Mervgotti, I moved the DVD to the coffee table in my parents’ basement, and there it stayed for another couple months.

On Sunday, while waiting for my laundry to finish, I decided it was finally time to watch it. I popped it in the ol’ DVD player to see what all the fuss was about.

Yeah, it has taken me forever to watch it — over seven years since it became a national sensation. (I remember a SportsCenter anchor mentioning a heated battle over who would be president of the official fan club.) Many praised it and others disregarded it. Having never seen it, I had no opinion, so I was very eager to see it for myself (despite having let the DVD languish for the whole year). It was a pop-culture landmark from my college years, and I wanted to experience it — albeit über late. What the hell was this mysterious Napoleon Dynamite?

Based on my first impression, not much. I waited and waited and waited for something epic to happen, some kind of keystone moment when everything fit together to make me realize it was worth 82 minutes of my life. Though the movie was entertaining and interesting, and I am glad I finally watched it, there were better things I could have been doing. It did not blow me away, but it also did not earn my contempt.

Around the time it was in theaters, I talked to a friend who saw it. He told me it was not laugh-out-loud funny when he watched it, but afterwards it grew on him and he started talking about it with others. “Remember that part when…” They would reminisce and giggle. I understand what he was getting at. The only laugh-out-loud moment for me was during the lunch scene at the chicken farm, when one of the farmers mumbles something with a mouthful of food. Later that night, however, I happened to think about the scene when Napoleon tries Uncle Rico’s time machine. I watched it again on YouTube and laughed my ass off.

Perhaps I took it too seriously, as I was trying to place it metaphorically in the era it was made: a time of post-9/11 hardcore American jingoism. Uncle Rico’s yearning for the good ol’ days of 1982 — when he was apparently a talented high school quarterback — and the eighties fashion sense of the Dynamites and Deb were hard not to overlook as references to Reaganism. (Perhaps that is why Deb accepts Pedro’s invitation to the dance.) The ambivalence and stereotyping surrounding Pedro was also in keeping with the hostilities toward Mexicans that the Bush administration seemed to foment.

Pleasantly surprising is the movie’s connection with Real Genius, at least in terms of actors. Jon Gries, who plays Uncle Rico, also played the role of Lazlo Hollyfeld in Real Genius. And Sandy Martin — Grandma Dynamite, who plays a very small role — also had a role in Real Genius as Mrs. Meredith. She was notably less grizzly in 1985.

Speaking of Grandma Dynamite, she is apparently the matriarch everyone depends on — buying everyone steaks and raising llamas — but when she breaks her coccyx no one visits her in the hospital. Very interesting.

I guess I will have to let Napoleon Dynamite soak for a little while, and perhaps watch it again before returning it to Bobblehead for pawning. (I am giving it back whether he wants it or not.)