So far, the top contender for my December LV beer recommendation is Breckenridge Christmas Ale. It earned honorable mention last year, and once again it is in the running. Standing in its way are three more candidates I will sample over the next two days. 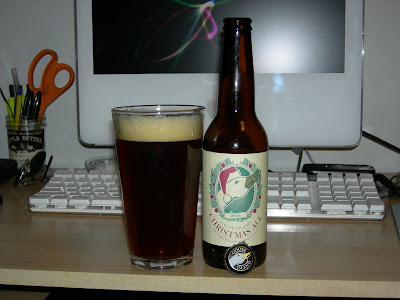 Appearance: Straight pour into a pint glass. The color is darkish copper/amber that is hazy with hovering sedimentation. Two fingers of slightly tan foam dissipated slowly to leave trails of foam on the glass, a spotted lacing, and bubbly ring around the edge.

Smell: When I popped the cap I got a whiff of Christmas-esque cinnamon. In the bottle it smells like a hybrid brown/pale ale. Scents of brown sugar, caramel, molasses, and toffee are well-balanced by grapefruit and metallic hops. The hops fade as the beer warms, allowing the sweetness and malts to shine through, especially the brown sugar.

Taste: A thickish mouthfeel allows the flavors to emerge slowly. First are the malts and sweets — caramel, cocoa, brown sugar, molasses, and toffee — which are then complimented by the bite of the pale ale hoppiness and a little holiday spice — grapefruit, metallic hops, and cinnamon. Each sip leaves a lingering bitterness on the back of the tongue.

Drinkability: It is a very solid holiday beer. It offers both the malts the season has me craving and the spicy edge I want from holiday releases without overemphasizing either.

-Style: Though Goose Island says the recipe changes slightly every year, it is basically “a complex brown ale.” BA concurs, classifying it as American Brown Ale.

-According to Goose Island, the beer can be cellared for up to five years.

-The back label says, “Best enjoyed in a nonic pint glass.” Nonic pint glasses are similar to the almost ubiquitous shaker pint glass, but are a few ounces larger and feature a bump near the top to make it easier to hold while standing. I “bought” a couple at Brother’s in downtown Iowa City during my only visit there sometime in ’04. I have no clue why Goose Island recommends it as ideal glassware. It is comparable to a regular shaker.