'Let the fireworks begin': The sounds of capitalism 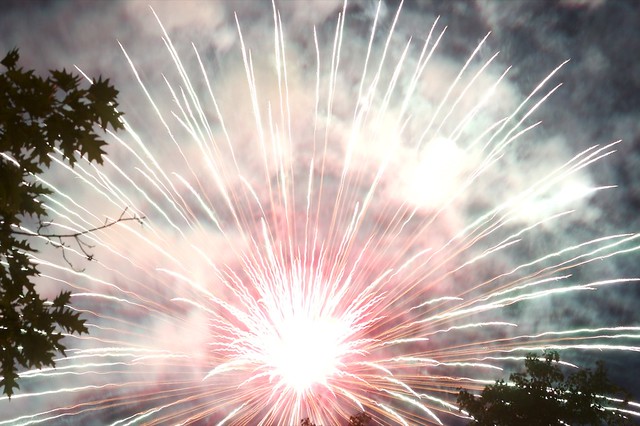 As Mervgotti and I walked to my car through the thick, warm evening air Monday night after dinner with Sweets and Zaza in Cedar Rapids, we paused and listened to the constant sound of exploding fireworks that rang out near and far. It reminded me of the scene in Saving Private Ryan, where Tom Hanks and company are overnighting in a church and gunfire and shelling can be heard in the distance.

Unlike Iowa City, Cedar Rapids did not ban the use of consumer-grade fireworks when the state legalized them in May—and it seemed like almost every other person in Sweets and Zaza’s neighborhood was taking advantage of it. Before turning left onto 19th Street, there was a massive explosion in the direction I needed to go. “Do I really want to go that way?” I thought, lingering at the intersection, the sound of my blinker echoing in the car. Despite my aversion to loud noises and explosions, I turned anyway. A block down the street I noticed a man approaching a blackened spot on the sidewalk, ready to reload. On a side street, firecrackers popped in front of one house while bottle rockets shot into the sky a few driveways down. Fireworks fizzled above us.

Ah, the sweet sounds of capitalism.

Now I know why almost every letter to the editor printed in the CRG in late June was a complaint about fireworks.

Though I don’t think Iowa’s first fireworks season in nearly 80 years has been a fiasco, it was messy and loud. As retail tents popped up in every store parking lot in some cities, lawsuits flew in others as municipalities tried to regulate sales. State and federal judges scratched their heads, unsure how to decipher the vague, new law. (Even the bill’s sponsor said the law needs to be revisited in the next legislative session.) Fireworks caused house and garage fires, I’m sure many Iowans were burned and maimed (oh, the stories that will surface...), and thousands of complaints were sent to elected officials and police departments across the state. (Meanwhile, former-Governor Terry Branstad, who signed the bill legalizing fireworks, is in Beijing transitioning to his new job as the U.S. ambassador to China. That’s fine. While the smoke and smell of fireworks will clear here, the smog in Beijing won’t.)

Needless to say, the state endured a very noisy and smoky learning curve, and officials are now assessing the damage to make adjustments to life with legalized fireworks.

The genie is out of the bottle and any proposal to reinstate the state ban—which I am sure there will be in some circles—is futile. The state’s longtime ban had become futile, anyway, especially since Iowa is almost surrounded by states where fireworks are legal. Though Sweets and Zaza’s neighborhood sounded like a warzone this year, it sounded the exact same way last year when I visited on the Fourth of July. Either they had the misfortune of buying a house in a neighborhood of pyromaniacs, or Iowans generally want to buy and use fireworks. It will happen no matter what, so let Iowans buy what they want inside the state. (It’s not a bad idea given the state’s growing budget deficit.)

Echoing Bobblehead, I think it is also stupid to have local law enforcement responding to hundreds of fireworks complaints. Recklessness, terrorization/intimidation, and alcohol-induced stupidity are worth reporting and responding to—not petty annoyances.

What’s the solution? While cities that allowed the use of fireworks are now contemplating bans, like Cedar Rapids—where more fireworks retailers set up shop than in any other part of the state—I am not sure if it is a good idea. Though Iowa City seemed to be much tamer—at least my neighborhood—people were still using fireworks. Right now, I’m taking a more libertarian approach to fireworks. Local bans are useless since sales are allowed statewide. At this point, I think the best and probably only thing cities and counties should do is strictly enforce the hours and dates fireworks can be used.