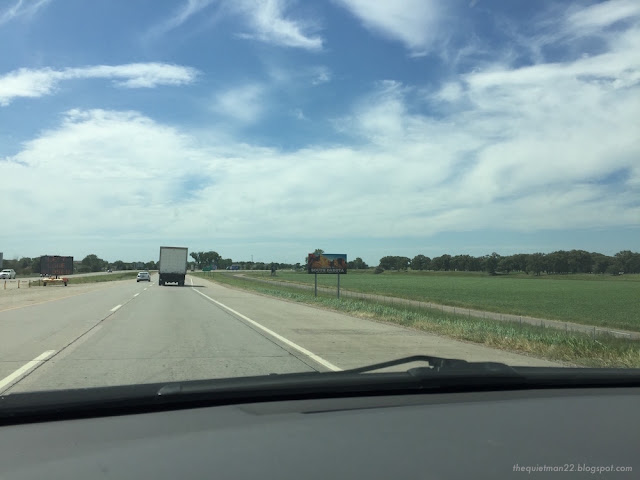 Yesterday, the first official day of my vacation, I drove across Iowa into South Dakota just to say I have been there.

In hindsight, it was a dumb thing to do—or at least it was dumb to drive all that way and not stay for a night.

But before I get into that, let’s talk about the Mount Rushmore State—or at least the nine miles of it that I saw.

First of all, I did not realize I crossed the border into South Dakota. The Interstate 29 bridge over the Missouri River is quite inconspicuous and, despite expecting it, I did not see the sign welcoming motorists to the state. Either I missed it or it was blocked by a truck when I passed. Regardless, I figured I had missed something when I noticed the mile marker numbers had reset and saw small casinos lining the surface streets. When I saw an 80-mph speed limit sign, that clinched it. (I did not realize the Interstate speed limit in South Dakota is 80 mph. I also saw a km/h conversion sign, too, which I thought was interesting.) When I reached exit 9, I turned around, crossed back into Iowa, turned back into South Dakota, took a picture of the sign I missed the first time, then turned around again and headed to Des Moines.

Needless to stay, the short excursion into my 29th state—the culmination of the long-ass drive to get there—was quite anticlimactic.

Though I did add South Dakota to the list of states I have visited, and traveled through parts of the Hawkeye State I had never been to (far western Iowa along Interstate 29 and the Loess Hills along Interstate 680), I did a lot of driving—exactly what I thought about avoiding on my vacation.

And it was a long drive. Just as I was disheartened to see NORTH PLATTE 96 on a sign driving through Nebraska last year, my heart sank when I saw FT DODGE 85 on a sign somewhere west of Cedar Falls. Ugh! It was a long day that gave me RAGBRAI flashbacks. I even stopped at rural cemeteries to rest and water some trees. (Boy, did those trees need watering! The western part of the state is pretty dry.) It was dusty, too, with all the construction to widen U.S. Highway 20 to four lanes. That was one reason why I took the trip: to see the progress on what the DOT is calling the “final 40.” (Once the final 40 is complete, I expect the governor, lieutenant governor [or acting lieutenant governor], maybe Steve King, and DOT officials to drink forties at the opening ceremony.) A lot of progress has been made, but there is still a lot of work to be done.

Anyway, I thought about camping at Union Grove State Park—which seems like a quiet, secluded place—or renting a cabin at the Lewis and Clark Recreational Area to break up the circuitous trip to the Des Moines area. But I didn’t. I should have, yes, but it was really hot yesterday and I did not feel like camping by myself. I like camping, but am not crazy about the fact that the only thing protecting me from other, potentially psychotic, campers and the rest of the mad, mad, mad, mad world is a thin layer of canvas.

But, hey—state number 29! And I got to try out my uncle’s Yakima trunk rack. At first I kept one eye on my bike in the rearview mirror, hoping it wouldn’t fall off and cause a pileup. My anxiety eased, though, as the miles passed, the rack held fast, and my Raleigh remained attached. I think I found a new traveling companion.