It has been a while since I posted a mid-week version of BotW, so tonight I grabbed a little something while securing a sixer of Anchor’s latest Christmas Ale. The beer tonight is Jingle Java Holiday Stout, brewed by the Bent River Brewing Company of Moline, Illinois. 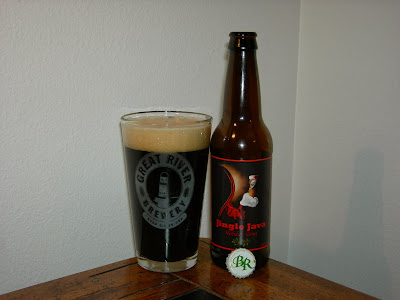 Appearance: Poured into a pint glass. The color is non-opaque black; light passes through when held to a lamp, making the beer glow a murky, deep ruby-brown. Two fingers of luscious, buttery, thick, and light tan head dissipates slowly and evenly. When settled, it leaves an even skim and sticky ring of lacing around the edge.

Smell: Very intense! Freshly brewed coffee is what hits the nose first and is followed by an onslaught of cinnamon, pecan, spiced rum, and vanilla. It smells a lot like the festive holiday coffee my mom drinks around Christmas. Woo!

Taste: The mouthfeel is thick and the flavor is just as potent as the aroma. Freshly brewed espresso is most prominent and lingers after each sip. Other flavors include roasted pecans, vanilla, and spiced rum. The cinnamon is not as noticeable, though.

Drinkability: This is tasty and bombastic stuff! Hats off to Bent River for making such an intense and festive holiday beer!

-Style: Bent River calls it coffee stout. Written on one side of the label is, “Oatmeal stout with coffee added.”

-Description from the beer’s webpage:

This highly anticipated seasonal beer marks the beginning of the holiday season for many. Our coffee stout is enhanced by adding vanilla, caramel, pecan, cinnamon, and rum. These festive flavors are the only sweet treat Santa really needs!

-According to the Bent River website, Jingle Java is the brewery’s only seasonal release. (And what a seasonal it is!)