Beer of the Weekend #457: Schweinsbräu Weisse

I submitted my June recommendations to the LV today but still have a couple candidates waiting in the fridge. The first candidate (or former candidate, I should say) is something that caught my eye at the Co-op (I bought it at John’s, though): Schweinsbräu Weisse, brewed by the Riedenburger Brauhaus of Riedenburg, Germany 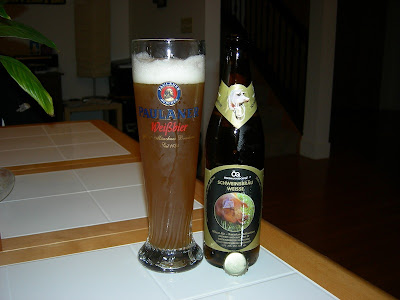 The pig was what caught my attention. A number of Schweinsbräu brews have hit the IC market and I thought I would try the hefe first.

Here is a rather sad note: I do not think hefeweizen is my favorite style anymore. Five years ago, I considered hefeweizen the nectar of the gods. Last week, though, I tried Ayinger Bräu Weisse and Weihenstephaner Hefeweissbier and neither had any flavor. They were bland. Perhaps they were too old (Lord knows how long certain beers have been sitting in the John’s beer cellar), but the lackluster experience shook me to the core. If that is how hefeweizen tastes, the style is no longer my favorite.

Appearance: Poured into a weizen glass. The color is cloudy caramel. Two fingers of light, bubbly head settled very quickly for a hefe, leaving a bubbly lacing that is reminiscent of bath water. For whatever reason, the bottle immediately overflowed after I popped the cap. All I did was move it from the fridge to the counter. Weird.

Taste: The mouthfeel is just about spot on: full but delicate. The flavor mostly mirrors the smell, but the fruit flavors are more prominent than the spice. Banana, cloves, apple, a little pepper, wheat, and caramel. The spice does vie for prominence after the beer has warmed. Some toasted malt emerges late, too.

Drinkability: It is nothing spectacular, but it is a tasty, run-of-the-mill hefe.