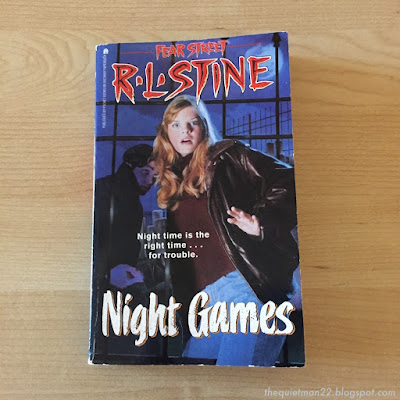 The whole world appeared so still. So unreal. Different … as if Shadyside were a different place late at night. Some kind of fantasy place of silvers and grays and long, black shadows. (p. 25)

Having read the first book in the Fear Street Saga series, my plan was to read the second book next. Unfortunately, the copy I ordered a month ago on Amazon is still (as Fievel Mousekewitz would sing) somewhere out there. I have the third book in the series, but the second book is MIA.

I hope it arrives soon. If not, I suppose that gives me the opportunity to do something that has become our new national forte — complain. In the meantime, I decided to read Night Games.

While walking home after a night of dancing, Diane and her three friends bump into Spencer, who they have not seen in over a year. Spencer invites them to partake in what he calls “Night Games” — nighttime adventures and pranks that give him a rush (I’m not exactly sure why it’s capitalized). Diane and company follow along and immediately become addicted to the freedom of roaming the night while the rest of Shadyside slumbers unsuspectingly. However, the harmless fun they first have under the cover of darkness becomes mean-spirited when Diane’s boyfriend uses them to exact revenge. After that, their “Night Games” lead them on a path to murder … and deus ex machina.

Night Games is a great story; it’s engaging, intriguing, and realistic. It appeals to me personally as a night person; I feel an affinity to the concept of exploring and enjoying the night, so I immediately connected to the book. I relish runs and walks after dark, when the world looks and feels differently than it does during the day, when fewer people are out and about. The darkness is peaceful and calming (though sometimes intimidating). One of the best things about taking night classes in college (or maybe the only good thing) was walking home afterward. Campus and downtown were very different at night and the trek back to my apartment was peaceful and meditative, especially during autumn and early winter. I feel at ease in the dark, and experience a clarity and tranquility that are impossible to achieve at any other time, except maybe at sunset. Though I couldn’t relate to the night games the characters played (especially the malicious ones), I could empathize when Diane feels the thrill of sneaking out of the house, walking around when no one else is awake. (For the record, I sadly don’t take many nighttime walks anymore. Perhaps that will change as the days continue to shorten this year.)

The story keeps one wondering and I was eager to read how everything would tie together (or not). However, when the climax arrives, the book makes an abrupt turn that left me laughing and disappointed. Sure, I suppose the ending does tie everything together — but it does so in a very strange and unexpected way, one that I felt was a disservice to the rest of the book. It felt cheap and rushed. It did not ruin the overall experience of the book, but it does leave an unpleasant aftertaste.

On to some noteworthy items.

The story takes place sometime in late autumn or early winter — most likely November — so the chilly nights Diane and company explore just about match those we are currently experiencing. That made me happy.

Night Games’ front cover brings out the design enthusiast in me. Though many Fear Street book covers are drawn images (which are sometimes very realistic), the cover of Night Games looks more like a collage. The cemetery in the background looks like it was drawn, and so does the odd gate (there must be an unseen gap because I don’t think she can fit between the verticals bars), but the young woman and man look like they were photographed. Looking closely, I can see the unnatural edges of a clipping path. (Oh, clipping paths…) The edge of her left shoulder is cleverly feathered and masked by the moonlight, but the edges around the young man’s face and the back of his head are too neat and feature a very faint, off-color outline. (The young man on the cover looks a lot like Matthew Rhys from The Americans. I doubt it’s him, though.)

A cell phone is mentioned in Night Games — a first among the original, nineties Fear Street series books that I have read. Though cell phones are featured quite a bit in the new Fear Street novels, they are nonexistent in the older books, obviously because very few people had them at the time. A couple years ago, someone asked me how I would incorporate cell phones and everyday technology into my novel (if I ever actually commit myself and write it). It had never dawned on me that, as a realist, the use of technology would need to be reflected in my book. How would the characters use it? Would it affect the story? The increased use of technology, especially cell phones, has had an influence on the way Fear Street books are written. They don’t play a huge role — they are mostly used for minor communication between characters — but certain scenes or drama that take place in the older books are no longer possible/plausible in the new novels. In Night Games, when Diane and a few friends are unable to contact another character at home, they drive around town searching for him. Would that happen now? I doubt it.