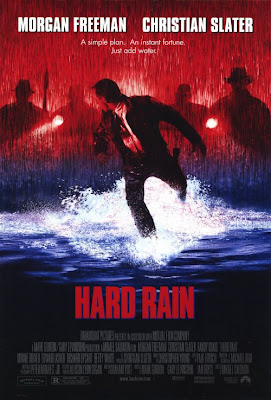 Does anybody else remember this movie? Besides Morgan Freeman, who probably looks back and thinks, “Wait a minute. I was in this movie? My name was on the poster?”? I have not seen it since it was released on video way back in the day. I am fuzzy on the details, but I remember that money is trying to be stolen and it is raining — hard. Hence the ingenious title. Anyway, that is what we got yesterday: hard rain.

I was mistaken: the rain we received was not part of Winter Storm Yogi. Yogi dropped snow on the Rockies, Dakotas, and Minnesota. The unnamed storm that pummeled us yesterday was unrelated and stretched from Northern Missouri to, eventually, Chicago, where nearly a half-foot of rain fell. According to Weather Underground, Iowa City’s local rainfall total yesterday was 3.98 inches. Normal for the entire month is 3.5 inches, and to date we have received 8.45 inches in April.

And it is still raining, and forecast to do so off-and-on into next week. It is not necessarily a bad thing since most of the state was running a nine- to ten-inch rainfall deficit after last year’s drought. But we do not need too much rain. Oh, how quickly things seem to change.

I am not going to complain though. Outside of the very narrow window of sunny and 75 degrees, everyone seems to complain about the weather. At least I now live in a place where the weather actually changes from day to day.