Your court of courts 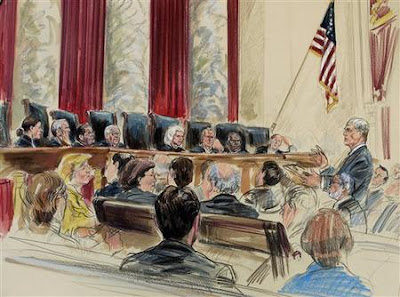 The Supreme Court has been working overtime lately. Well, the cases they’ve tried have been newsworthy, at least. I’m sure the Supreme Court makes decisions more often than this (shows how much I follow the happenings of the highest and most powerful branch of the nation’s justice system), but many are not worthy enough for headlines and indepth analysis in the New York Times. Three rulings of the past 48-hours have been, though.

Recent Supreme Court decisions have made me cock my head in uncertain understanding, like how a dog will look at you when you bark at it. The dog will cock its head slightly to one side and give you the look that says, “What the fuck is he saying?” I can clearly understand what they decided (“This guy is barking at me”) but their rationale, interpretation, and decisioning often leave me scratching my head (“I have no clue what he’s saying”).

Since Exxon has paid about $507 million to compensate more than 32,000 Alaska Natives, landowners and commercial fishermen for the damage caused by the spill, it should have to pay no more than that amount in punitive damages, Justice Souter said.

I didn’t know this until now: Exxon Mobil is the world’s largest company by revenue. In 2007 it grossed $404.5 billion. Yet, for ruining the environment and economy of Prince William Sound they’re only given a $1.07 billion ticket. That equates to roughly $30,000 per plaintiff.

Here’s my main beef with the Supreme Court: The judges sit atop our justice system and decide, with ultimate finality, what is right and wrong, what is constitutional and what isn’t — an incredible power — yet they are not elected by the people of the United States. Sure, they’re appointed by the president and congress, who are (supposedly) voted into office. But we the people don’t get to choose them ourselves. Their selection usually follows party lines (as they may if elected, too): Republican administrations appoint judges who are more conservative and Democrats nominate justices with liberal leanings. If one party can place a judge in the Supreme Court who is sympathetic to their ideals they gain a huge advantage in the war of conflicting agendas. Our current Supreme Court includes seven justices appointed by Republicans and two appointed by Democrats. Think about that: The people who interpret our laws and constitution are really glorified politicians with robes and law degrees. It’s the same case in minor courts all across the country, but I happen to remember being able to elect them to the bench.

Another thing about the Supreme Court: The constitution states that justices “shall hold their Offices during good Behavior.” “[G]ood Behavior” is usually interpreted as...the remainder of their lives. For-ev-er. What kind of government figure holds their position indefinitely until they die or are no longer competent to rule? Dictators and royalty, that’s who. The average age of our current Supreme Court is 68. Just think, Samuel Alito could still be placing his vote for another 30 years! You’ve got to be kidding me! All this in the country that prides itself as being “for the people, by the people.”

Even though I don’t like guns, it’s comforting to know I have a right to buy one in case I have to defend myself against my own government.