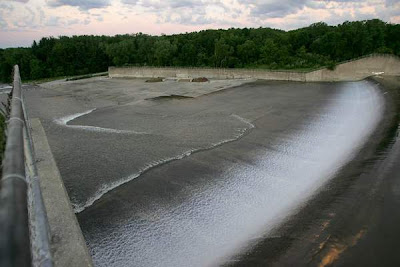 For the first time since the epic Flood of '93, and only the second time ever, the Coralville Reservoir is flowing over it's spillway.

According to the Iowa City Press-Citizen the level of the Iowa River at 7 a.m. this morning was 25.82 feet and is forecast to rise to 27 feet tomorrow. Flood stage is 22 feet. More rain is expected this weekend and the river will not crest until next Thursday when it reaches 30.9 feet. The water level at the ol' Rez topped the 712 foot level spillway last night and is expected to peak on Monday at 715.4 feet. That's just below the record of 716.71 feet set in 1993.

The PC has some good video of the water flowing over but I can't get the web-link feature to work. That's a Gannett newspaper for you.

The summer of ’93 was epic. The entire Midwest was under water (including City Park and Taft Speedway). The Mississippi and its tributaries swelled beyond their conceivable limits. I was 10 and remember the chaos and damage it caused locally. Dubuque Street was closed and the Mayflower dorm and fraternity houses along the road were evacuated. Trees in City Park were tattooed with the high water mark for years. The most incredible damage turned out into an archeological find. Water rushing over the spillway ripped away feet of soil and exposed Devonian era fossils embedded in ancient coral reefs. Cool shit.

Ninety-three was the flood. Nothing could top it, in the grand scale at least. Probably not locally, either. Right?

Everything I heard from my parents had made me curious, so yesterday morning I checked out the Press-Citizen website. It’s something I don’t normally do — I get my IC news from my dad — so when I looked through the photo galleries and saw Dubuque Street submerged, the Mayflower isolated in a little island against the hill, and City Park covered in water I finally realized how serious the situation was.

It’s ’93 all over again. Possibly worse.

When the Iowa River reaches 29 feet major flood damage will occur on the UI campus. The IMU, EPB, art museum, Hancher Auditorium, Clapp Hall, and the Main Library — holy temple of knowledge — all flooded. Bridges will close and traveling across town will be impossible.

My dad’s been sandbagging like crazy for the last week. Yesterday he said he had to drill 84 holes in the Park Road bridge (he works for the city, so it’s not as if he goes around drilling holes in bridges) to relieve the pressure the rising water creates. As water inches toward the bottom of the deck it pressurizes the air trapped between girders and pushes on the bridge. The holes he drilled will allow the air to escape. They’ll possibly sprout into small fountains if the river reaches the deck.

In my stomach I have that feeling. It’s the empty pit feeling you get when you’re left completely helpless and there’s nothing you can do. I want to do something but I can’t. Everyone I know there is high and dry and very little of Iowa City will be affected, but volunteers are needed to help sandbag. If I were there I’d help. I’d go with my dad and do whatever I could. But here I am in Southern California, amidst one of the worst droughts the west has ever endured. I can’t do shit except sit here and read the news while my hometown gets drenched.