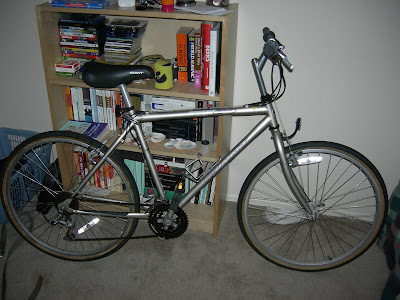 Tires: Whatever shit the previous owner bought, or probably the stock tires.

I’d been thinking about getting a bike since before leaving Iowa City. My original plan was to build one myself to learn the fine technicalities that make bicycles go. I could customize it to my liking and fix and tune it on my own. But I learned anyone could easily work on and modify a pre-manufactured bike. Plus, building your own is more expensive than buying one in a shop.

Off and on I did research. I knew nothing about bikes and spent a lot of time determining which was best for me. A hybrid — a cross between a mountain bike and road, or racing, bike — would be best for the type of riding I wanted to do: Streets and sidewalks around town. Hybrids feature the smooth, thin tires of roadies, which are ideal for even surfaces. Knobby, thick tires are for grip and stability on unpaved surfaces. Hybrids are built for an easy, upright riding posture, which is the mountain bike element. The seats on road bikes are high — above the handlebars — so cyclists can lean forward and decrease air resistance. Hybrids are perfect for everyday riding, like going to the grocery store or the beach (in my case, at least).

As is my custom, though, I thought about buying one, wanted to buy one, but didn’t. I put it off and put it off and put it off. I just didn’t want to fork over the money. I had been eyeing a Giant Cypress hybrid sold at a bike shop in Costa Mesa for a while. It was perfect for me…but cost over $300. The cheapskate in me keeps my credit card tucked safely in my wallet, so I started browsing the ads on Craigslist. There was little to choose from. Most of the bikes for sale were cruisers or hardcore mountain bikes, but once in a while a good hybrid would pop up.

It’s exactly what happened last Saturday when I hopped online. I browsed the morning posts and saw GIANT IGUANA HYBRID. I read the ad and considered the pics. The poster was asking $95 and it didn’t seem like a bad price. It was exactly what I was looking for and two hundred bucks less than the newest version.

I called the number, drove to the guy’s house, tried it out, and took it home for $90. The seller even drove me to the nearest Wells Fargo so I could get money from the ATM.

Finally, I had a bike.

For a day I just admired it. The guy I bought it from recommended I get new wheels and tires, but after a little more online research (you can seriously learn a lot about bike maintenance on YouTube) I realized it just needed a tube for the back tire and a little derailleur adjustment. I’ll have to have the gears tuned by a real professional, but it’s good enough to ride around and take me where I want to go.

Ever since I started working on the Iguana I’ve become amazed at the simplicity of bicycles. Two wheels, gears, chain, frame, handlebars, and seat. It’s a little more complicated than that (I forgot brakes, which are very important), but it’s an incredibly straightforward invention and mode of transportation. Americans have relegated the bicycle to a piece of recreational equipment. Though a lot of us grow up riding bikes I’m sure most adults in this country don’t own a two-wheel wonder any more. If they do it’s most likely old and hasn’t been ridden in a long time. Case in point: My parents used to have a blue Schwinn that had a baby seat attached behind the back wheel.

I’ve only ridden the Iguana a few times but I’ve already fallen in love again. Riding was easy and peaceful — when the car traffic wasn’t zooming past, that is. It was good exercise, too.