And now for something completely different.

Well, not really. It’s a can of beer, which is nothing new or different. But it is a really big can of beer.

The annual family reunion was in Cedar Rapids over the weekend, so I took my growler to the Third Base Brewery. However, I learned that Third Base does not fill growlers. Instead, it fills crowlers, single-use 32-ounce cans that are filled and sealed on-site. I had seen the empty cans and sealing machine before but never saw the process or had a can filled. Unable to fill my growler, I bought a crowler filled with Flying Aces Pale Ale. 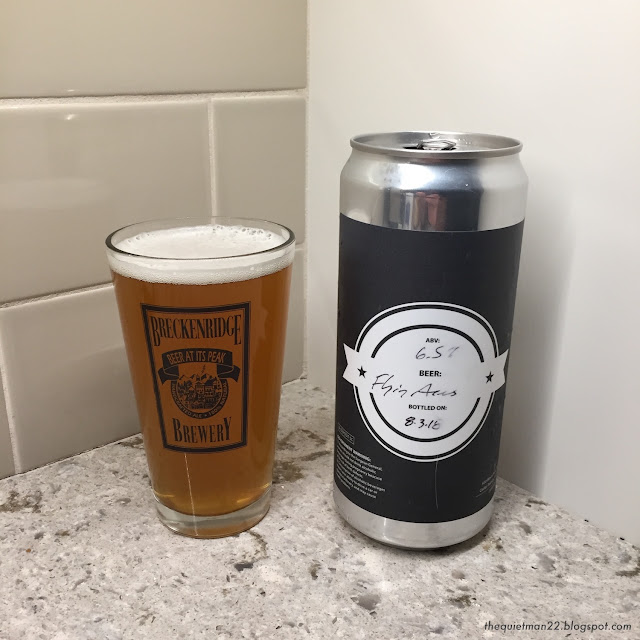 The color is medium, lightly hazy amber. About a half finger of beige, bubbly head does not stick around for very long before dissipating, leaving a skim and collar of bubbly foam around the edge.

The aroma is a pleasant blend of malt, citrus, and spice. Light caramel lays the foundation for orange, grapefruit, and lemon citrus. Herbal hops provide a pleasing bite and spiciness that lingers on the tongue and tonsils.

The flavor is maltier than the aroma, but all the characters from the aroma are there: orange, lemon zest, grapefruit, and spice. Hints of tropical fruit emerge after it has warmed (i.e., the 16 ounces that sat in the can during the first pint). It’s pleasant and drinkable.

• Price: $10 for a 32-ounce crowler fill. That’s pretty expensive, especially since the price to fill a 64-ounce growler is consistently around $15.

• I bought the crowler on Friday and intended to drink it that night when I returned home. However, I ended up drinking two pints and a pitcher of Bud Light on my own at the reunion. It was free and free beer is good beer.

• The cap includes the usual deposit information, so here’s the thing I want to know: Did I pay a five-cent deposit on the can and can I redeem it? I’m leaning no. I think that information is printed on the caps no matter what because the manufacturer does not know what they will be used for, much akin to drive-through ATMs with Braille buttons.

• The unfortunate thing about a crowler is that after it’s opened, it needs to be consumed since it cannot be resealed.