The Bookworm: The Dark Secret 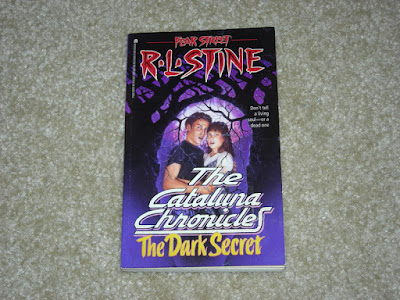 A cold autumn wind swept across the burned-out field, rattling the charred stalks of corn. The odor of smoke hung in the air. The odor of death. The only sign of life — the distant hoot of an owl (p. 9).

What’s the dark secret in The Dark Secret? I have no clue — even after reading the book. I don’t even know who the couple is on the front cover.

The Cataluna Chronicles rolls on with The Dark Secret. Much like the series’ first book, The Evil Moon, The Dark Secret follows two storylines — one set in 1698 and the other in 1995.

Back in the ol’ West Hampshire Colony in the seventeenth century, we find William Parker pursuing Catherine Hatchett, following her trail of destruction in his quest to avenge the deaths of his father and brother. Caught and lost in a snowstorm, William is rescued by a beautiful girl who leads him to her father’s farmhouse. She nurses him back to health with the help of her cousin, and William is welcomed into the small, hodgepodge family and offered the chance to help on the farm. William wonders if he should put down his quest for vengeance and enjoy life on the farm, and the company of his beautiful rescuer, for a while. However, he cannot shake the sense that Catherine’s evil is nearby, perhaps even in the household in some form or another. Is it the family cat? Is it Catherine’s strange cousin? Bad luck and poor choices force William away from the farm and he eventually finds himself face-to-face with Catherine once again. He follows her into the woods and sees, for the first time, the white sports car.

Nearly three hundred years into the future, stepsisters Regina and Lauren are given the Cataluna by their parents. Both love the car, but Lauren notices that it changes Regina. She becomes aggressive and drives recklessly, endangering others. A hit-and-run driver is terrorizing Shadyside and Lauren is convinced it is Regina. When she finally confronts Regina, Lauren learns the truth and realizes she is under the Cataluna’s spell.

The book ends with the seventeenth century storyline literally crashing into its twentieth century counterpart, which means I got my wish — the storylines came together.

Though better than The Evil Moon — the writing and the story are both better — The Dark Secret is still pretty lame. As mentioned above, the title and cover art are misleading. What exactly is the dark secret in The Dark Secret? What, according to the teasing text on the cover, am I not supposed to tell a living — or dead — soul? Is it Lauren’s realization at the end? I have no clue what else it could be. And the couple on the cover? Who the hell are they? The only couple in the book — Regina and her boyfriend — does not play a prominent role. They do not have a dark secret or are caught off-guard holding each other in the woods. Nowhere close to it. Granted, not many Fear Street covers match anything that happens in the book, but this one seems especially incompatible.

As for good post-opening quotes, nothing memorable stood out in either The Evil Moon or The Dark Secret. The quote I did use at the top of this post is notable because of its autumn-fitting description — minus the burned-out field. The cool wind, fields of dried (not charred) corn, and the ghostly hoots of an owl fit the season.

Regardless of its quirks and mysteries, The Dark Secret is the last book from my original Fear Street collection. As I’ve said before, I believe The Thrill Club and The Dark Secret were the only books in the collection that I had never read. Not any more. I have finally read them all.

Though the original collection is now complete, it is time to continue adding to it.