Beer of the Weekend #713: Ridgeback Ale

I’m behind on beer reviews, so it’s time to catch up.

The beer of the night last Thursday was Ridgeback Ale, brewed by the No Label Brewery of Katy, Texas. 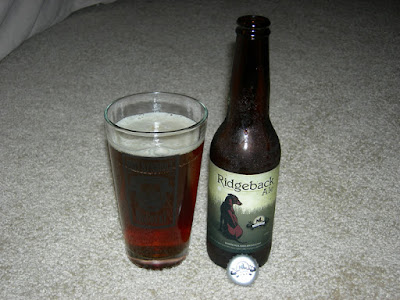 The color is deep, ruddy amber. About a finger of off-white, grayish head leaves a skim and bubbly ring around the edge. The aroma is deep and toasty, but sweet and dark, with toasted malt, caramel, dark esters, and cherry licorice. The flavor mostly mirrors the aroma, but it has quite a bitter bite. There are flavors of toasted malt, caramel, dark esters (which are in the background), hop bitterness, astringency, and some cocoa. It leaves a lasting bitterness on the taste buds. As the beer warms, though, the bitterness fades. Honestly, it reminds me a lot of a Goose Island beer, perhaps the brown ale. It is something that befits Thanksgiving — which is a good thing. I love Thanksgiving beers.

• Style: The brewery calls it a dark American amber.

• Price: $8.73 per six-pack of bottles at the Spec’s Wine, Spirits & Finer Foods store on Texas State Highway 121 in The Colony, Texas.

• According to No Label’s website, Ridgeback Ale is named “after our dog Hailey.” Whose dog? The brewer’s? The owner’s? It doesn’t say. Perhaps it is the brewery’s dog. Anyway, if it were named after the dog, wouldn’t the beer be called Hailey?