The Bookworm: In Dubious Battle 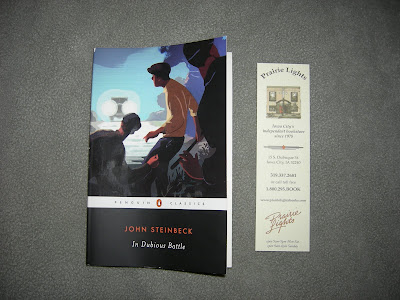 Jim said, “Y’ought to think only of the end, Doc. Out of all this struggle a good thing is going to grow. That makes it worthwhile.”

“Jim, I wish I knew it. But in my little experience the end is never very different in its nature from the means. Damn it, Jim, you can only build a violent thing with violence.”

“I don’t believe that,” Jim said. “All great things have violent beginnings.”

“There aren’t any beginnings,” Burton said. “Nor any ends. It seems to me that man has engaged in a blind and fearful struggle out of a past he can’t remember, into a future he can’t forsee nor understand. And man has met and defeated every obstacle, every enemy except one. He cannot win over himself. How mankind hates itself.”

My reading habit is back with a vengeance, and I hope it hasn’t scheduled any more extended vacations. My uncle will be in Huntington Beach sometime in the next week, delivering the box with all the books I bought while I was in Iowa City. (Yes, through a sad turn of events, my uncle has my box of books, but let’s not get into that.) Having finished this book reduces my reading queue to five, but it will double when I get that box. All the better, I suppose. More reading to do.

In Dubious Battle by John Steinbeck was the last book in the collection I brought home from Iowa City last September. It took me forever to get around to it, and proved to be a fast and entertaining read.

The book tells the story of two Communist Party members who help create and organize a strike by migrant apple pickers in the fictional Torgas Valley of California. I suppose one could say this book was the precursor for what was to come from Steinbeck. Although it’s written from an omniscient but close third person perspective, Jim Nolan is Steinbeck’s main focus. Having grown up in a hard, working class family, Nolan has just joined the Party and is acting as an apprentice to Mac, a veteran member and organizer. Nolan is idealistic and eager to help, and In Dubious Battle showcases his maturation from greenhorn to a leader of men. But, of course, things don’t go as planned.

And it’s not like I expect the strike to go off without a hitch, anyway. This is Steinbeck. Somewhere around the corner is tragedy. That’s one of the things I love about Steinbeck: you know what to expect, but not how it will come. Steinbeck was a master at crafting realistic, believable fiction that followed a predictable path to heartbreak. Part of me wants to cast him aside as a poser; label him a Hollywood-esque formulator, constantly following the same general premise. That’s one thing I don’t like about fiction (and Hollywood) now: it’s too formulaic and inevitable. But instead of being convenient and artificial, Steinbeck’s fiction feels to me unfeigned and genuine, and I wonder if it’s tragically predictable because it is — ironically — realistic and true to life.

Obviously I’m not going to say what happens. Read it for yourself.

This edition of In Dubious Battle — reproduced from the original novel published by Covici-Friede in 1936 — includes an introduction and endnotes from Warren French. Although a little too revealing (if you want a clue about what happens, read the introduction), French’s preface set me on the right analytical path and shed light on Steinbeck’s political leanings and the novel’s history. Steinbeck was often accused of being a communist, but he in fact disliked them. In a letter he wrote to a friend after completing In Dubious Battle, he wrote “I don’t like communists, either. I mean I dislike them as people. I rather imagine the apostles had the same waspish qualities and the New Testament is proof they had equally bad manners.” Adding to his distain for commies was an odd turn of events when the final manuscript reached the publisher. Steinbeck’s good friend Pascal Covici was out of the office, and the text happened to land in the hands of an editor with communist sympathies, who rejected the novel because he thought the ideology was inaccurate. When Covici found out he immediately rescinded the rejection, which goes to show it helps having friends in high places. (After publication the book would continue to be derided by Marxists, though Steinbeck says his information came from Irish and Italian communists who had done actual field work like the kind done by Mac and Jim.)

New word I learned: Tonsure. One of the key characters has a tonsure, a hairstyle that was common with priests and monks. A patch at the crown of the head is shaved, leaving a ring of hair below it. It was supposed to symbolize a renunciation of fashion, but I’m unsure why it’s worn by one of the characters, especially since he has no religious affiliations.

In Dubious Battle is classic Steinbeck.