As promised, the beer this weekend is Hemp Ale brewed by the Humboldt Brewing Company of Arcata, California. 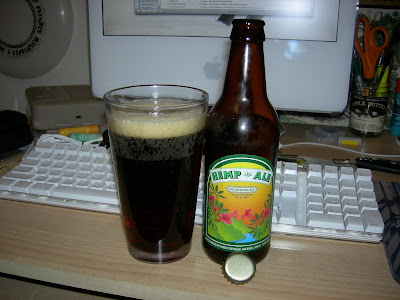 This is a somewhat momentous tasting: today I registered for a BeerAdvocate account. I’ve been mulling it over for a while and finally decided to take the plunge, becoming a member of the “global, grassroots network, powered by an independent community of over 150,000 beer enthusiasts and industry professionals who are dedicated to supporting and promoting beer.” Basically it’s what beer connoisseurs and enthusiasts with an internet connection do when they drink. Although you don’t need an account to access their beer reviews, as I’ve done, you do need to be a member to write one. So from now on I will be posting my BotW sampling results on BA. It will just be a copy and paste job — nothing special — so BotW will continue to be my primary vehicle for sampling and personal quirkiness.

One other thing before I twist open a Hemp Ale (actually, the caps are not twist-offs): no more predetermining the beer of the weekend one week in advance. It takes all the fun out of deciding what to buy. Each tasting should be unique, catering to my specific impulses and cravings for that week, so no more promises.

Appearance: Poured a ruby brown and a finger of head developed and dissipated gradually, leaving a dense lacing on top.

Smell: Has a weak, indistinct smell. A scent of metallic hop bitterness dominated at first but sweetened to reveal an evergreen-like aroma, reminding me of a winter warmer. No hemp, unfortunately.

Taste: It wasn’t as bitter as the smell first suggests. Smooth caramel maltiness with a hint of spice that mellowed as my taste buds adjusted.

Drinkability: Hemp Ale was better than I expected, though I’d never know it was brewed with something distinct unless it was spelled out. The hemp failed to deliver something unique (for the first time in my life), but it does make for good drinking. It’s a well-balanced beer good for all occasions. I think I’ll burn a little Nag for the hell of it.

-Alcohol content: 5.7 percent ABV. I was a little buzzed, but unfortunately it was due to the alcohol.

-The Humboldt Brewing Company touts itself as being family owned and operated. The bottom of the carrier states:

Humboldt Brewing Company remains a family owned and operated brewery. This personal attention enables us to provide the quality and freshness found only in a true microbrewery.

However, according to the website Humboldt beers have been brewed in Paso Robles at the Firestone Walker Brewing Company since 2000, and the Humboldt Brewing Company ceased operations and closed its doors in 2003. From what I can tell, the “Humboldt Brewing Company” referred to on the bottles and carrier is a bar/restaurant in Arcata owned by Humboldt Brews LLC, the successor to the original company. The way I figure it, all the family does now is sell the beer it used to brew where their brewery once was. Weird. They sound a little like posers now.

-Here are some of my favorite scenes from “Friday” and “Half Baked”: