The Bookworm: The Crow Indians 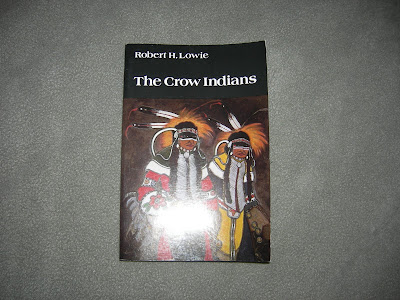 Yet here is a curious fact. Battered by natural forces and surrounded by enemies, the Crow managed to wrest from existence his portion of happiness. Ask an Indian of the old school whether he prefers modern security to the days of his youth: he will brush aside all recent advantages for a whiff of the buffalo-hunting days. If there was starvation then, there were buffalo tongues, too, — supreme among earthly dishes; if you were likely to be killed, you had a chance to gain glory. What is a Crow to look forward to nowadays? Shall he enter unequal competition with white farmers? And his sister aspire to wash the laundry of frontier towns? Under the old régime, harassed as he might be, the Crow was owner of his soul. He had somehow hammered out for himself standards that lifted him above the sordid animal-like fray for survival. So with all the grossness of his sex life there evolved awe-inspiring reverence for immaculate virtue; the callous egotism of the daily struggle for existence could be transmuted into purest self-sacrifice; above the formalized and sometimes tricky competition for honor emerged the loftiest defiance of relentless destiny.

I have a head cold, my first in a long time, so I’ve decided to catch up on blogging and finish this post on the last book I read, The Crow Indians by Robert H. Lowie.

The Crow Indians is yet another book leftover from college, one I likely read parts of. If I remember right the class was called Indians of North America; it provided a general overview of the major Amerindian tribes and their respective cultures. One of the tribes studied was the Crow, who inhabited the great northern plains in North Dakota and Montana.

Robert Lowie was an expert ethnographer who lived with the Crow off and on. He spent sessions with branches of the tribe during different seasons to document the Crow’s seasonal rituals, i.e. tobacco planting and harvesting. Based on the book I’m unsure how much time he spent with the tribe or if he stayed with them for consecutive years, but he did witness and participate in many Crow ceremonies and rites. Peppered throughout the book are personal experiences. One that comes to mind, after having finished the book a few weeks ago, is his story of sitting in a Crow sweat lodge and forcing himself to endure the unbearable heat. Lowie had a very intimate knowledge of the Crow and even had a functional grasp of the language; a native Crow once told him he spoke Apsáalooke well but had a foreign accent.

There’s no doubt Lowie was a respected authority on the Crow, but he chronicled the tribe when the white culture and lifestyle was undermining traditional ways more each day. At the time he studied the Crow in the 1920s and ‘30s the tribe had been concentrated on its current reservation in Montana; Lowie likely had an office in Crow Agency, the capital of the Crow Nation. Although his accounts are likely accurate of Crow life at the time, and many tribesmen still carried on with established customs as they do to this day, Lowie missed out on witnessing the tribe’s truly traditional why of life that was uninfected by European influences. But I shouldn’t nitpick because he was very thorough. When possible Lowie sought out the most elderly tribe members and asked about rituals and aspects of native life that had faded into the past or changed, those which he was unable to see firsthand. He also referenced older studies by past ethnographers who were with the Crow during the late-1800s, so I think the book provides a well-rounded summary of Crow culture, though I’m no expert on ethnographies.

(Oh, for those who aren’t familiar with the term “ethnography,” as I was when I took the class, here’s a quick definition provided by the dictionary on my MacBook: the scientific description of the customs of individual peoples and cultures.)

The reason I read The Crow Indians is the same reason I registered for the class it was assigned for. I’ve always had an interest in Amerindian culture. As I’ve mentioned before, I’m part Ojibwa — albeit a small part. I can’t remember the exact ancestral connection, but someone on my mom’s side married a Chippewa woman. The Ojibwa are different from the Crow, inhabiting a different region of the country, but I didn’t have an ethnography of the Ojibwa sitting on my shelf. I’ve never done extensive research on the Ojibwa, but I was hoping my book about the Crow would get me interested.

Ethnographies, I assume, are usually hardcore and esoteric, written for fellow academics and ethnographers. But The Crow Indians, although very dense and tedious at times, is understandable and light. Lowie outlines Crow life from the cradle to the grave; he summarizes the birthing and naming rituals, the games boys and girls played as children, and rites of passage into adulthood. He went in-depth when it came to Crow courting and sex life. To my surprise, the Crow slept around…a lot. Most Crow men had numerous wives, some of whom were sisters, and would also have a few extramarital sweethearts. Some Crow engaged in a ritual of wife-kidnapping, where they would take the wife of a rival club member, run away with her, and discard her after a week or so. It was the social norm, and woman participated equally. Needless to say it was sometimes difficult to determine who fathered whom, which is probably why the Crow were matrilineal, where ancestral lines are traced through the mother.

That was where the text became very dense. His explanation of matrilineal relationships — who’s who and what each family member was called — was tedious. Even after having forced myself to read it I had no clue or care when it was written about later. Sure it helped, but I wasn’t reading it closely enough to have it engrained in my mind for later reference. Besides, I think Lowie anticipated that because he kindly reminded us non-specialty readers and explained family connections when they were important. That says a lot about Lowie as a social-scientist, showing that although he was engaged in his research he was not out of touch and pretentious.

Lowie also transcribed a number of Crow creation stories told to him by tribe elders, which are key to understanding Crow beliefs and morals. He also described, in painstaking detail, many traditional Crow dances and ceremonies. These also became a bit monotonous. He was able to describe the procedures, but I don’t think the imagery he used regarding the site, dance, and dress transferred to paper very well. He tried to make the reader see, smell, hear, and feel the ambiance, but it didn’t work for me.

Here’s one thing that shocked me. Environmentalists and conversationalists have always idolized the resourcefulness of the Amerindians because it’s commonly believed they never wasted anything. But, in fact, they did. Lowie didn’t directly focus on the way the Crow used or discarded certain items, but scattered throughout the book are accounts of waste. Kinless children, who were ostracized and lived outside the main camps, wore discarded moccasins that were left behind when villages moved. One ceremony required that a certain type of buffalo bull be shot and killed in a certain way, and Crow warriors typically killed many bison before getting it right; they then left the mistakes to rot (though I’m sure the carnivores of the plains gladly ate the meat). It was surprising to read about waste.

Overall I felt The Crow Indians was a good, interesting read. When I’ve finished my current “to read” stack (which will probably double given all the books I’ve bought since I’ve been in Iowa City), I think I’ll try to find a study on the Ojibwa.