The beer this weekend is Winterhook Winter Ale brewed by The Redhook Ale Brewery of Woodinville, Washington (there’s also a brewery in Portsmouth, New Hampshire, but Redhook is originally from the Seattle area). 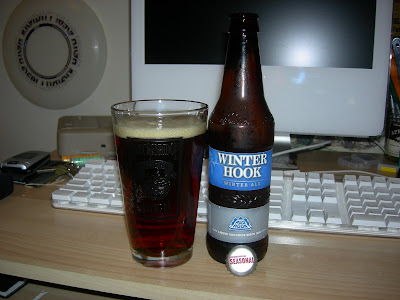 ‘Tis the season and BotW will be spreading the holiday cheer by profiling a few brews only available around the holiday’s. Since it’s the first BotW at my new apartment I was originally going to sample a different style of Cooper’s in honor of my Aussi roommate. But I decided to do it later; there are too many beers only available in the narrow window of time surrounding Christmas and I wanted to try a few before the opportunity passed me by, Pharcyde style.

Appearance: Winterhook poured a deep red-brown and developed one finger of foamy head that was a rust color.

Smell: I’ve never smelled a beer like this before. There is a strong citrus aroma married to spicy pine. It reminds me of the strong scent of the family Christmas tree when we first brought it in the house, though Winterhook doesn’t smell as earthy or sappy (and there’s no mess of shed needles).

Taste: Very hoppy. My taste buds were in shock after the first sip; it’s been a long time since I had something with a substantial hop presence. At first there is a taste of caramel, but it’s immediately run over by a freight train of bitterness. One of the reviewers on BeerAdvocate aptly described it as “a little hop bomb.” After a few sips the initial intensity is gone. The most disturbing thing is I can actually taste alcohol at the end. It reminds me of the guilty burn after a vodka shot.

Drinkability: I’ve never had eggnog before, but I suppose Winterhook makes a tempting substitute.

-As a seasonal beer, Winterhook is only available between September and January. I think it’s odd, though, that a winter ale is put on shelves before summer is over and removed just when winter is hitting its stride. The Redhook website states Winterhook’s “rich, full body and chestnut color make it the perfect beer for chilly winter days!” That is, it’s the perfect beer for the one month and ten days of winter when it’s available.

-Speaking of the Redhook website, it features a bartender/beer guru standing behind an online bar (where only Redhook products are on tap, of course). He’s useless and it bothers me. He stands there as if awaiting your order, but he has no purpose other than to be the portal for an imbedded email application, which you can use to send the beer guru a question. He taps his fingers on the bar, winks, scratches the back of his head, and dries pint glasses. He stars at you. Eventually his animation stops and he freezes into a welcoming smile, looking into your eyes as if about to ask, “What’ll ya have?” (Pabst Blue Ribbon!)

-If you look carefully at the pic you’ll see there are two labels separated by a decorative etching encircling the middle of the bottle. Unique idea, but I think it looks bad.

The Quite Man’s grade: Not what I was expecting. From the descriptions I was expecting something similar to a smooth brown ale. But Redhook went “shock and awe” on me. C.