Beer of the Weekend #805: Buffalo Butt

My uncle from Texas came for Thanksgiving and brought me two sixers of Lone Star State beer, one of which is the beer of the weekend: Buffalo Butt, brewed by Rahr & Sons Brewing Company of Fort Worth, Texas. 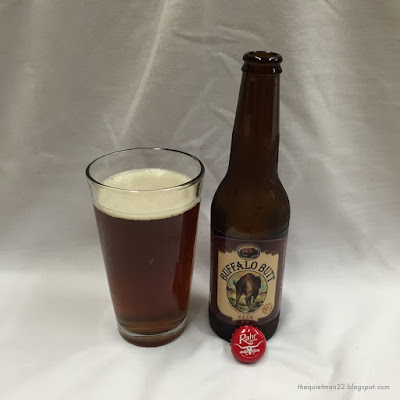 Buffalo Butt pours a medium, copper amber. A pathetic, straight pour produces a half-finger of light tan head that leaves a skim and ring around the edge. There is a lot of sweet caramel and cherry licorice in the aroma. There are also scents of toffee, toasted malt, brown sugar, and vanilla. The flavor mostly mirrors the candy-like aroma with flavors of caramel, toasted malt, toffee, cherry licorice, brown sugar, and a touch of cocoa. It leaves a pleasing, floral, spicy bitterness on the tonsils at the end of each sip.

• Food pairings: According to the beer’s webpage, “Buffalo Butt pairs well with Cajun and Mexican food. Of course we also think it's the perfect beer to be served with a rump roast, but that's only because we've never really grown up.”

A group of cowboys hanging out at one of the many bars in Fort Worth's "Hell's Half Acre" would quench their thirst while telling tales of their buffalo hunting days. When one of the cowboys said a nice, cold beer was the only thing that could make him forget the sight of a buffalo's butt, the local brewmaster laughed and vowed to create a beer to commemorate the posterior of the majestic beast. Today, Rahr & Sons Brewing Co. continues this tradition with our own recipe for Buffalo Butt beer - a rich, amber lager that doesn't require months on a dusty trail to be enjoyed.