The beer of the weekend is the second beer Bobblehead brought back from the Twin Cities: Lynnbrook Raspberry Sour Ale, brewed by the Destihl Brewery of Bloomington, Illinois. 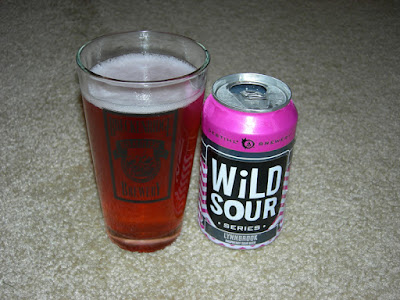 The color of the beer is what the brewery calls “fuchsia.” It is deep pink with ruby tones. A pink-tinted head dissipates pretty quickly and leaves wisps of skim and a thin ring around the edge. It smells like vinegar and it kind of reminds me of dry apple cider. It is very sour and the wild yeast is prominent. The first sip is — wow! — sour. It is pretty damn tart. Besides the sourness — which is dominant and just about overpowering — there is a touch of vinegar and fruit sweetness. It does taste like raspberries; it is reminiscent of freshly picked berries. The beer’s description mentions “subtle lemon” and yogurt, and both are present. The yogurt is present with a subtle bacteria/fermented flavor that kind of reminds me of cheese curd in a way.

• Style: According to the brewery website, it is a “a wild Berliner-Style Weisse with raspberries added.”

• Price: $8.99 per four-pack of cans at Richfield Municipal Liquors in Richfield, Minnesota.

• I have no clue what grade to give this stuff. It’s not my style and I do not know if I want to drink any more of it; I may dump out the other three cans. (I probably won’t because dumping beer down the drain is blasphemy.) Yet it seems well crafted. So think I am going to give it a lower grade, but with an asterisk because sour beers are just not my thing.