Buzz on the buzz

In an hour I'll be leaving to watch "Strange Brew" with a buddy of mine from work. I'm not planning on writing creatively tonight, but I wanted to write something.

Big news: I buzzed my hair last Saturday. I love it. Running my hands through the short, soft strands has become my new addiction. Like I've been telling everyone, it was time to reinvent my head. The idea's been floating around in me for a long time, and last summer I came very close to doing it. But I chickened out Â— I'll admit it. This time was different. It felt right. Even though I had no clue what to expect, I had confidence.

I can't remember the last time my hair was so short. When I was a kid I got a flat top for the summer, then let it grow out when school started. But I don't think it was cut this short. On Saturday morning, when I sat down in the chair, my barber asked how long I wanted it. I didn't want it as long as an inch, but I didn't want it as short as half an inch. She had a 3/4 inch attachment for the buzzer (whatever it's called). It wasn't too long, but it wasn't too short. She gave me the option of making it shorter after the first buzz, but I liked the results.

I'll spice up this post by adding before and after pictures. Here's before: 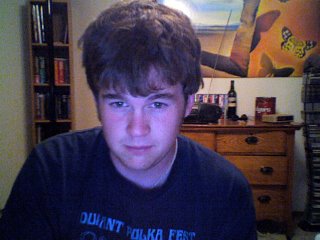 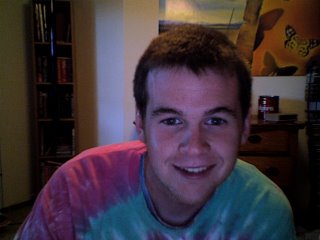 I'll admit I was a little nervous. I had no clue how I'd look. It'd been over a decade since my forehead was exposed to the world, and I changed a lot in that time. I thought the hairs would be short enough to show my pale scalp. But they weren't. My head is now an even blanket of brownblondredgray hair. For the time being it's only straight. No more waves or curls. Even after a week, though, I can see the flow and direction developing among the strands, like wind patterns on a weather map.

A funny thing happened when I left the barber shop and got into my car. I opened the sun roof and could feel the warmth of the sunlight on the top of my head. It was amazing. Only when the sun was at its zenith, and the day was blazing hot could I feel the sunlight on my head when my hair was shaggy. For the rest of the day I lounged outside and let the sun warm my scalp and tan the lighter portions of my forehead.